Warning Dreams From God: How God Warns Us Through Dreams 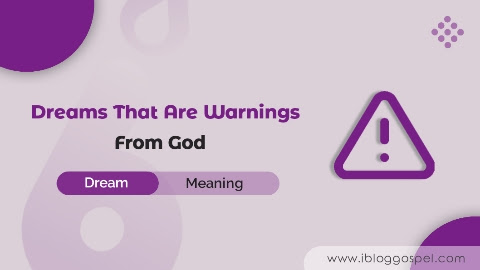 God communicates with most Christians today through their dreams. He sends them instructions, warnings and revelations of what He is doing and what the enemy is plotting against them. It is important that every genuine Christian desires to see dreams from God. Today, we will learn about warning dreams from God.
You will agree with me that our God is not a rigid taskmaster who lives billions of miles away within the galaxies. He's a loving and caring Father who is always with us—even closer than a brother.
In His efforts to ensure our safety, He doesn't only send His angels to protect and guide us (Psalm 91:11); He also goes on to warn us of possible dangers and problems we might encounter, so that we could avoid and avert them.
I'm sure you want to hear more on this topic. So follow up as we discuss more on it under the following subheadings:
At least nine out of every ten Christians will admit that they have seen (or have been seeing) warning dreams from God. Besides, our Heavenly Father cares so much that He doesn't give such dreams only to Christians alone. The scriptures record many occasions where God gave dreams to unbelievers.
Have you ever received a warning dream from God? How can one recognise such dreams, and what should be our response to them? Let's trust the Holy Spirit to help us find the right answers to these questions (and more) as we progress.

God Speaks Through Dreams And Visions

A promise was made by the Father and spoken through the mouth of the Prophet Joel, that in the last days, God will pour out His Spirit on all flesh; activating and enabling many to dream dreams and see visions. We are living in those days prophesied by Joel.

Joel 2:28 NIV
And afterward, I will pour out my Spirit on all people. Your sons and daughters will prophesy, your old men will dream dreams, your young men will see visions.

The dreams spoken about in this prophecy are not just ordinary dreams. They are dreams from God; they are prophetic dreams. God takes pleasure in communicating with people; He has always longed to stay in touch with humans through every possible means. The barrier that prevented this from happening was sin.
For this reason, the Son gave His life as a ransom for our sins; bridging that gap that separated man from God, and reconnecting man back to God. This opened us up to diverse streams of communication with God.
The visions mentioned in Joel 2:28 are not just open visions. Most godly dreams we see in the night are prophetic dreams. The Bible calls them night visions. As you can see in the below scriptures, many people saw these types of dreams:

Daniel 7:13 NIV
In my vision at night I looked, and there before me was one like a son of man, coming with the clouds of heaven. He approached the Ancient of Days and was led into his presence.

2 Samuel 7:5 KJV
And it came to pass that night, that the word of the LORD came unto Nathan, saying, Go and tell my servant David, Thus saith the LORD, Shalt thou build me an house for me to dwell in?

God is always willing is speak to us through dreams and visions. For most of us who desire to have God lead us and direct our steps, understand that one way He could do that is through prophetic dreams and visions. We should desire and ask for such. God says we should ask Him!

Jeremiah 33:3 NKJV
Call to Me, and I will answer you, and show you great and mighty things, which you do not know.

Undoubtedly, God speaks through dreams and visions, and if we ask Him to open us up to this channel of communication, He will gladly do it.

When God Sends A Warning

One of the major channels through which God sends us warnings is our dreams. Although our Lord Jesus stated in the scriptures, that His sheep hears His still small voice—via the Holy Spirit (John 10:27), not every Christian have trained their spiritual senses to be able to discern God's voice while awake. That leaves God with the next available and easy-to-use option: the dream.

Job 33:14-17 NLT
For God speaks again and again, though people do not recognize it. He speaks in dreams, in visions of the night, when deep sleep falls on people as they lie in their beds. He whispers in their ears and terrifies them with warnings. He makes them turn from doing wrong; he keeps them from pride.

Dreams tend to be the least available means commonly used by the Lord to send us warnings. But that does not mean we should treat our dreams lightly. They are equally important as open visions and prophecies.
So many people would have been spared certain dangers, mishaps and evil that befell them if they paid attention to their dreams. In Job 33:14, we are told that God speaks again and again through dreams, but people do not recognise it. The same problem still repeats itself today—even among Christians. And the root cause is often the fact that not many people treat their dreams seriously.
When you go through scriptures, you will notice that God sent dreams to many people (both believers and unbelievers). One thing that stands out in this fact is that these people never joked over their dreams or discarded them as nothing. They always made sure they did everything within their power to get the accurate meaning of their dreams.
For instance, when King Nebuchadnezzar had a dream, he didn't just let it slide. He sought for the interpretation of his dream throughout his entire kingdom—even to the extent he was ready to execute the wise men of Babylon who couldn't interpret his dream (Daniel 2:24-49).

What To Do With Warning Dreams From God

When God sends a warning through dream, I believe we should take the following steps concerning that dream:
There are times God sends people warnings in their dreams, but they refuse to take action. Although they understood what their dream meant, they adamantly refused to do according to God's instructions! Know that this always comes with dire consequences.
We must understand that God will always do His best to keep us safe from dangers, but we as well have our part play in order to stay safe.

Warning Dreams In The Bible

Below are some warning dreams God showed to different people in the Bible.

Jacod had fled with his wife, children and belongings, from his boss and father-in-law, Laban. This irritated Laban and caused him to go after Jacob. But before embarking on his journey in pursuit after Jacob, God came to Laban in a dream and warned him to do no harm to Jacob.

Genesis 31:24 NKJV
But God had come to Laban the Syrian in a dream by night, and said to him, “Be careful that you speak to Jacob neither good nor bad.”

Although this warning dream came to someone else other than Jacob, we could see that God protected Jacob and ensured his safe travel through the warning dream.

The Magi Were Warned In A Dream

After paying homage to King Herod, the three wise men were warned by an angel of the Lord in a dream, not to return to Herod.

Matthew 2:12 NIV
And having been warned in a dream not to go back to Herod, they returned to their country by another route.

If the magi refused to heed this warning by going back to Herod, they would have likely revealed the location of the baby Jesus or their lives would have been in danger.

Joseph And Mary Were Warned About Herod's Ploy Against Baby Jesus

King Herod became furious after learning that a king that was far greater than him was born. For this reason, he was bent on terminating the life of the new born King (the baby Jesus).

Matthew 2:13 ESV
Now when they had departed, behold, an angel of the Lord appeared to Joseph in a dream and said, “Rise, take the child and his mother, and flee to Egypt, and remain there until I tell you, for Herod is about to search for the child, to destroy him.”

God had to send a warning to Mary and Joseph in a dream, concerning what Herod was plotting against their baby. If Mary and Joseph refused to heed this warning, there's no doubt that Jesus wouldn't have lived to fulfil His ministry on earth.

Abimelek Was Warned By God In A Dream

For the fear of being denied entry into the land of Gerar, Abraham resorted to lying to King Abimelek that Sarah was his sister.

Genesis 20:3 NIV
But God came to Abimelek in a dream one night and said to him, “You are as good as dead because of the woman you have taken; she is a married woman.”

The king had decided to take Sarah as one of his concubines, but God warned him in a dream not to do so—because Sarah was Abraham's wife. If Abimelek refused to heed this warning, he would have definitely attracted a curse upon himself.

How To Know If A Dream Is A Warning From God

Before we see some examples of warning dreams from God, below are some characteristics of dreams that come as warnings from God:
Some of you will start receiving warning dreams from the Lord after reading this article. It is one way God leads us. It's nothing to be scared of but something to desire.

On iBlogGospel, we have written on some dreams that are often warnings from God. Click on the titles to read their full meanings:
Remember that if you have a warning dream from God that you don't seem to understand, you can always send me a private message on WhatsApp, so we can talk about it.

Most warning dreams from God always tend to appear negative, because they're not expected to manifest. If God sends us a warning through a dream, but we refuse to do as He expects of us, then we shouldn't blame Him when what was revealed in the dream comes to pass in our waking life.
Beloved, I believe you learned something new today concerning warning dreams from God. If you found this article helpful, go ahead and share it with someone else out there.
God bless you.