How To Stop Habitual Sin 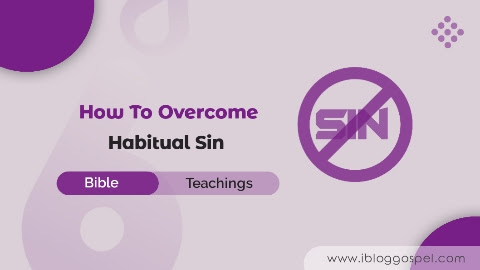 There are many challenges that come with being a Christian. One of those challenges is the struggle against habitual sin. Today, by the enablement of the Holy Spirit, we will learn the biblical principles on how to stop habitual sin.
While those in the world do not really care about what is sin and what isn't (talk less of seeking ways to overcome it), Christians on the other hand, understand the detrimental effects of sin. Every serious Christian out there knows that they shouldn't let sin rule over them. That is why they go extra miles to do all it takes to obtain their total deliverance from sin.
If you're one of those who have been struggling with repetitive sin, my prayer for you is that the Lord passes through this blog post to effect your deliverance. Amen!
In this article, we will discuss the following:

Hebrews 12:1 KJV
Wherefore seeing we also are compassed about with so great a cloud of witnesses, let us lay aside every weight, and the sin which doth so easily beset us, and let us run with patience the race that is set before us.

If a particular habitual sin has been one of your spiritual challenges, I encourage you to prayerfully read this article to the end and apply what you are about to learn. I'll be waiting to celebrate your victory over that persistent sin.

What Are Habitual Sins

According to the writer of the book of Hebrews, there are certain sins that are said to “easily ensnare, entangle or beset” us. They are what we call habitual sins today.
As Christians, there are sins that just won't let go, no matter how hard we try to strip them off us. They can be anything ranging from unhealthy addiction to a hobby we see as unharmful. Such sins do not only end up becoming a pain in the neck, but they also go a long way to prevent a Christian from walking in the reality of all that God has in store for them.
Because our God is holy (1 Peter 1:16), we must understand that it would be difficult for anyone to access more in Him without total consecration (2 Corinthians 6:17). For this reason, we must look at habitual sins with the greater goal in view: that it is more important to enjoy a better relationship with God than retain a sin that could prevent us from doing so.
The fact that a sin is difficult to overcome doesn't also mean it's impossible to overcome it. The Bible says that we have not resisted sin to the point of shedding blood:

Hebrews 12:4 NIV
In your struggle against sin, you have not yet resisted to the point of shedding your blood.

Which means that the difficulty level of overcoming besetting sin is not as high as some think. Sometimes, the problem isn't that people can never overcome a particular sin, but that people are not fully ready and equipped to overcome that sin.

Whenever the topic of habitual sin gets raised, one might be tempted to think it's only about sins that involve the body (like fornication). But habitual sins exist in various forms, some of which are as follows:
We can go on and on concerning the list of habitual sins; the list is endless. But as you can see, fornication is just one out of the many habitual sins that exist.
A habitual sin can even go as far as being any sin that people intentionally commit time and again. Any sin that has become a daily routine in one's life and is repeatedly practised is a habitual sin.
From the above list, it is apparent that nine of every ten Christians are faced with the challenge of overcoming one habitual sin or another.
To man, overcoming habitual sin may be impossible, but with God all things are possible.

According to the Lord's words in Mark 3:29, the only unforgivable sin is blasphemy against the Holy Spirit. If God can forgive murderers and abortionists, I don't see why He wouldn't forgive a habitual sin like lying, idleness or doubt.
What's not advisable to do is continually sinning and not willing to give up on one's sin—with the mindset that God will keep on forgiving.

Romans 6:1 ESV
What shall we say then? Are we to continue in sin that grace may abound?

We aren't supposed to take for granted the fact that God repeatedly forgives us of our sins. However, we should see each time God forgives our habitual sin as yet another chance He gives us to change and do better.

How To Overcome Habitual Sin

I assume that everyone who wants to overcome habitual sin is already genuinely saved and filled with the Holy Spirit. Anything outside of this doesn't work when it comes to overcoming sin.
Without Jesus in a man's life, sinning becomes a lifestyle and daily routine. That is why one must be truly saved, before they even think of overcoming sin. If you aren't yet saved, please pray this salvation prayer.
Everyone who hopes to overcome and live above sin must also be filled with the Holy Spirit. Without the enabling power of the Holy Spirit, living to please God is impossible. Living above sin cannot be achieved by might or human strength but by the Holy Spirit (Zechariah 4:6).
The above two requirements are fundamental. If these requirements are in place, we can further apply these steps:
Step-1: Understand Your Identity In Christ
One of the sayings that always gets me questioning the salvation of some Christians is the one that says, “I am a sinner saved by grace.” Why would a Christian say such a thing about their self? I find that to be very ridiculous!
Going on to use the present tense “I am” to emphasize that one is a sinner means that you're speaking about the present. You're literally saying that you're presently a sinner, but saved by grace. If you look closely, you'll find that there's no correlation between the two.
The two statements; “I'm a sinner” and “saved by grace” conflict each other. It's like saying nothing happens at salvation; or you were faking it when you gave your life to Christ.
Understand the power of redemption. Christ didn't die so that we remain sinners. He paid the price for sin in full. The moment you accepted Him, an instant transformation took place. The fact that it could take some time for that transformation to manifest outwardly does not mean it didn't happen. Be more conscious of the fact that Jesus delivered you from sin (once and for all) when you got saved.
It is true that certain sins may attempt to persist in the life of the new convert, but sin is dead. It has no power. In the same vein, we must count ourselves dead to sin and alive in Christ.

Romans 6:10-11 NLT
When he died, he died once to break the power of sin. But now that he lives, he lives for the glory of God. So you also should consider yourselves to be dead to the power of sin and alive to God through Christ Jesus.

This is a thing of conviction. Our convictions matter a lot. From a place of thinking that you are a sinner saved by grace, it becomes difficult to overcome sin. Because when that keeps being regurgitated, it consequently becomes a belief. The subconscious records that as the truth and goes on to steer that person's life based on it.
But when we speak and believe what the bible says about our new life in Christ, living above sin becomes easy.

Colossians 3:9-10 NIV
Do not lie to each other, since you have taken off your old self with its practices and have put on the new self, which is being renewed in knowledge in the image of its Creator.

After salvation, you're no longer the old you. Read again, memorise and speak that until it sinks in. Be able to recall it even in your dreams. Sin is not part of your new nature—which is after the likeness of Christ. Jesus died to deal the final blow on the power of sin. You're no longer a slave to sin. Whatever residue of sin that is left in your life is only struggling to survive. Don't give it the power to come back alive in you!

Romans 6:14 ESV
For sin will have no dominion over you, since you are not under law but under grace.

It is easier to overcome sin when a Christian is more conscious of who they became after they got saved. No one lives above sin by being sin-conscious. As a true believer in Jesus Christ, “you are NOT” a sinner saved by grace, although “you were” before your salvation. There's a world of difference between the two.
Step-2: Confess The Sin And Ask For The Lord's Help To Overcome It
Now that you understand who you are in Christ—that you're no longer a sinner (and not expected to continue sinning), go on to confess the habitual sin to the Lord once again. Since your mind is already made up to overcome the sin, go on and ask the Lord Jesus to help you do just that.
Step-3: Abide In Christ
By abiding in Christ, we stay glued to everything that will help bring us closer to Him daily. Interestingly, it happens that the more closer to God we get, the more like Him we become. Do not neglect the basics: studying and meditating on the word, praying daily and fasting regularly.
God is holy; He's neither a sinner nor struggling with sin. If we do the needful to get us closer to Him, we will be transformed into His likeness. We can only become better, not worse.
Step-4: If You Fail The First Time, Try Again
If you fall into the same sin again after following these steps, do not condemn yourself—because Jesus hasn't condemned you. Do not stop there either! Pick up yourself, repeat the steps and try again.
Step-5: Persist Until You Overcome
If we must be stubborn, we can be stubborn in a good way. Be someone who doesn't give up on what they want to achieve until they actually achieve it. If you're persistent, you won't look at the number of times you failed. Set your gaze on the goal you plan to achieve and aim for it until you achieve it.
When God sees that we're persistent in our resistance against sin, He will always give us a helping hand.

Beloved, you see that stopping habitual sin is not an impossibility. It's actually do-able. I believe every Christian out there can overcome the sin that easily besets them, if they follow the guide in this article.
Also be reminded that no one can overcome the sin they love. If you make yourself available to be tempted into committing the sin you want to overcome, then you shouldn't expect miracles. Make deliberate efforts to not make yourself vulnerable to the habitual sin you want to let go.
If you found this article on “how to stop habitual sin” useful, you can help someone else out there by sharing it with them.
God bless you.