Biblical Meaning Of Owls In Dreams 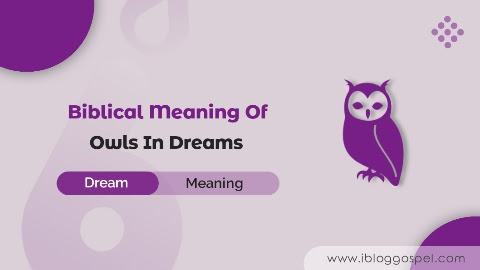 Isaiah 13:21 NLT
Desert animals will move into the ruined city, and the houses will be haunted by howling creatures. Owls will live among the ruins, and wild goats will go there to dance.

In this Christian dream interpretation article, we will discuss some of the following:
Different people see different kinds of dreams of owls. Gleaning from some of such dreams that have been shared with me, I can tell that more than 80% dreams involving an owl are always scary ones. I believe that this alone gives us a sneak peek into what seeing an owl in the dream means.

What does it mean when you dream about owls ? Although owls in dreams represent many things, they rarely symbolize something good. Owl dreams are often a bad omen and rarely mean something positive. Seeing an owl in the dream will always require that the dreamer seriously prays against any form of mishap or misfortune that the enemy is plotting against them.

Dreams of owls are very common among people of different cultures. This is likely because, due to lack of knowledge, some people entertain these dreams. While some dreams are common only among Africans; and some common only among Americans, it is not so with owl dreams. There are many Asians, Americans and Africans, etc, who keep seeing owls in their dreams daily.
Many cultures and religions believe that owls represent knowledge, wisdom, transformation, change, intuition and mystery. But this is just the conventional spiritual meaning of owls widely accepted by the world.
We must understand that most of the world's cultures and religions do not hold the same beliefs as we Christians do. Since they neither believe in the Christian God nor the holy Bible, as Christians, we cannot blindly accept or endorse their interpretations of spiritual things.
Many verses in the Bible jointly present us with an idea on what an owl represents spiritually. We can see this as follows:
From the above scriptural citations, you can see that it is not a good sign when an owl appears in your dream.
Let me put it this way: whenever anyone happens to see an owl in their dream, they must understand that the enemy is out to perpetrate evil against them. Sometimes, owl dreams come as a live and direct, on-the-go spiritual attack from the kingdom of darkness against a person. I'll throw more light on this as we progress.

When you go through scriptures, you will discover that the Bible makes mention of different species of owls in diverse contexts, and they often symbolize...
When you look closely, you'll also notice that one thing stands out concerning these symbols of an owl in scriptures: none of them is positive.
One of God's commands to the Jews in the old testament was to abstain from eating owls, because they are unclean (Leviticus 11:16-17; Deuteronomy 14:16). If a creature which the Bible doesn't portray in a good light appears or visits you in your dream, I don't think that is a good thing!
It is true that all that God created was good (according to Genesis 1:31). But there are certain animals whose image the Bible uses to portray something not so good. An example of such is the serpent. The Bible tells us that God created all creeping things (including snakes), but on several occasions in the same Bible, we see that the symbol of the serpent is used to represent Satan, demons and evil. The same goes for owls and many other animals.
You can see how all of these are interconnected with each other, giving us a complete picture on what an owl represents, both biblically and spiritually.

Spiritual Meaning Of Owls In Dreams

There are many people out there who have been seeing owls in their dreams, but because they do not understand what these dreams mean, they simply accept and allow them to continue. Some even go to the extent of believing that the appearance of owls brings them good luck, money and blessings.
But I believe that is about to change today, after you must have gotten the proper understanding concerning these dreams from this article.

1. A Dream Of Owl May Come With A Message Of Death

The kingdom of darkness is fond of using the image of nocturnal animals (especially owls and cats) to perpetrate evil. When an owl appears in the dream, in most cases, it carries a message that death is soon to visit the family of the dreamer. We can see from all that is shared so far, that one of the spiritual meaning of an owl is mourning.
This is to say, the moment an owl appears in our dream, we must understand that its appearance isn't to bring peace or good tidings, but a death sentence. The spirit of death could sometimes assume the image of an owl in dreams.
In many traditions, owls are seen as a messenger of death. If you notice that an owl is loitering around your apartment during the day, do not treat this as a normal occurrence because it rarely is. Except the bird has a nest in your home, there's nothing normal about an owl from nowhere lingering around your home. Its appearance isn't for fun; it always carries a message—that something evil is soon to befall someone within the visited location.

2. A Dream Of Owl Can Be A Witchcraft Attack

Nocturnal animals are favourites to witches and warlocks. Understand that most times, agents of darkness will masquerade as these animals, to launch attacks against their targets in their sleep.
A lot of people have reportedly seen an owl by their window staring at them on the bed while they sleep. Others have reported seeing an owl in their room in the dream; sometimes staring at them or attacking and attempting to harm them. This should never be treated lightly. Such dreams often come as a direct witchcraft attack on the dreamer.
In short, if these dreams come more frequently, it often happens that there is a witch or warlock living around the dreamer and trying to make their life a living hell—by constantly launching attacks against them.
When you see an owl in your dream, it is very likely that you are under a witchcraft attack in that very moment! It is a valid proof that a witch or warlock is doing their very best to harm you. The best option is to try waking up from such a dream and go into prayers immediately.

If you're one of those who have been coming under spiritual attacks from owls in the dream, know that you are under a serious witchcraft attack. Someone somewhere is using black magic against you, with the intent of harming you.
Do you often see an owl in your dream attacking and trying to harm you? If you have been treating such dreams as ordinary and meaningless, it's high time you stop seeing them that way! Such spiritual attacks have left many under the bondage, control and manipulations of witches and warlocks. Witches don't attack as a way of catching fun; they attack to ruin lives; they mean business! So it is unwise to allow such dreams to continue.
If you're one of those who often come under spiritual attacks from owls in dream, I recommend you read our article on Prayers Against Witchcraft Attacks.

Prayer Against Owls In Dreams

Final Words On Meaning Of Owls In Dreams

Owl attacks in dreams is one of the very serious spiritual attacks that no one should treat lightly. It takes more than just prayers, but also the right and accurate knowledge in spiritual warfare to gain victory against witchcraft attacks. If you're looking to get equipped for permanent victory in spiritual warfare, then go get my book, “Anointed For Battle” on Amazon. I'm sure you will be glad you did.
Beloved, I believe you got a clear understanding concerning the biblical and spiritual meaning of owls in dreams by reading this article.
I'm sure there are many other people out there who are looking for a Christian dream interpretation blog like ours. Always remember to share our articles with others.
God bless you.