What Does The Bible Say About Laziness 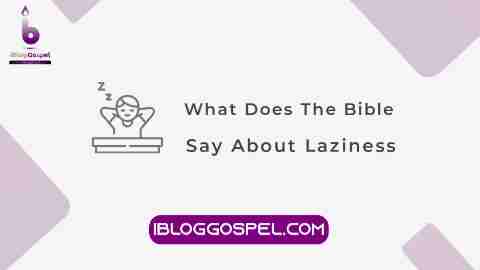 The problem of laziness is widespread; it is one of the deadliest enemies of productivity. Laziness has a track record of annihilating greatness and destinies. But there's even more to this. What does the Bible say about laziness? Let's learn this and more in today's teaching.
There are many who are caught in this endless loop of laziness that has wrecked their lives for years. While some are willing to discover ways to escape the menace of laziness, others are adamant when it comes to overcoming laziness.
In this article, we will touch on some of the following points:
For those who have been in search for a biblical guide to overcoming laziness, I pray this article becomes just that resource you've been searching for.

Ecclesiastes 10:18 NKJV
Because of laziness the building decays, And through idleness of hands the house leaks.

I believe everyone knows that it is wrong to be lazy. There is always this inner knowing that works alongside the conscience to reprove everyone who is given to laziness (irrespective of their age).

What Does God Say About Laziness

Laziness is simply the unwillingness to do work or use energy. The Bible interchangeably uses the words; idleness, sluggard and slothfulness to describe laziness.

Proverbs 12:24 BSB
The hand of the diligent will rule, but laziness ends in forced labor.

It is true that everyone occasionally feels lazy, but it is in allowing such a feeling to overcome and rule over a person that it becomes a serious problem. It is not okay to frequently feel lazy. When laziness becomes a lifestyle, failure in life is inevitable.
King Solomon analysed much on the devastating effects of laziness in his books of Proverbs and Ecclesiastes. Besides that, throughout the holy scriptures, slothfulness is actively and constantly rebuked.

2 Thessalonians 3:10 ESV
For even when we were with you, we would give you this command: If anyone is not willing to work, let him not eat.

Many things have advantages and disadvantages, but there is not even one advantage attached to laziness. Everyone who has laziness as their lifestyle should understand that it is not just about them living the way they like, but it's more about what God approves and what He disapproves. The Lord has made it crystal clear in His Word that He is against every form of laziness.

Proverbs 22:13 NKJV
The lazy man says, “There is a lion outside! I shall be slain in the streets!”

Ecclesiastes 11:14 NIV
Whoever watches the wind will not plant; whoever looks at the clouds will not reap.

Due to laziness, people always have a hard time doing things they're suppose to do in time. They always have flimsy excuses as reasons for postponing doing something till a later date. Even on that later date, they always have renewed reasons to postpone and push doing things further into the future.
Apparently, procrastination directly fights a man's obedience to this scripture:

Ephesians 5:16 ESV
Making the best use of the time, because the days are evil.

Nothing gets done in time due to laziness and procrastination. People miss divine opportunities, connections and become the enemy fighting the manifestion of their own destiny due to procrastination. It is evident that procrastinating is not fun, since it attacks God's purpose for one's life.

We will classify laziness into three basic types as follows:

This is the unwillingness to do physical work or carry out physical activities (including exercises) that involve exertion of energy. In some cases,  physical laziness could result in fatigue, gluttony and obesity.

Mental laziness is simply the unwillingness to use the mind or develop it to its full potential. Instead of taking time to think a solution through concerning a problem, people always resort to the easier way—not thinking too hard. Mental laziness hates critical thinking. It is what makes a student to not study enough or effectively for exams, but prefer to seek shortcuts to good grades.
Those who go after “get rich quick” schemes also come under this category.

Hebrews 5:12 NIV
In fact, though by this time you ought to be teachers, you need someone to teach you the elementary truths of God’s word all over again. You need milk, not solid food!

It is mostly due to spiritual laziness that many remain spiritual infants in Christ for many years, instead of advancing spiritually.
At this point, I hope we've already seen how corrosive the effects of laziness could be. Irrespective of what type of laziness it is, they altogether fight to prevent people from achieving great feats and walking in God's purpose for their life.

How To Overcome Spiritual Laziness

Every lazy person is missing something very vital in their life; something that could push them to do things they should do and do them in time. That one and very important thing is self-discipline. When there is self-discipline, people often become responsible and do things they should do, while avoiding things they're not suppose to do.
Spiritual laziness is a manifestion of the uncrucified flesh. The only thing the Bible reveals as fighting against us doing spiritual things is the flesh. The flesh rules when efforts haven't been made to discipline it. Look at Paul's words in the following scripture:

The Bible tells us that the Spirit is always willing but there is weakness in the flesh—which goes on to rule over a person and hinder them—but only when allowed!

Matthew 26:41
Watch and pray, lest you enter into temptation. The spirit indeed is willing, but the flesh is weak.”

I underlined “only when allowed” because it is not impossible to tackle the problem that the flesh poses to spirituality. Because the flesh acts and behaves this way, we are instructed to “crucify” it.
Crucifying the flesh and making it submit under the rulership of the Holy Spirit will require self-discipline. When this is achieved, the problem of spiritual laziness must have been tackled.
In a nutshell, spiritual laziness happens as a result of not being crucified with Christ and not crucifying the flesh. When have our flesh crucified, there's left no more room for fatique, laziness or lack of zeal towards doing spiritual things.
Spiritual laziness is one of the signs that a person is not fully submitted to God and not filled with the Holy Spirit. Deliverance from spirit of laziness can be achieved by fixing the highlighted issues.
Recommended:

Prayer Points Against The Spirit Of Laziness

If you feel you need prayers against laziness, go on and pray as led. But isn't it true that some who are caught in spiritual laziness will still not pray?
Besides, I believe not every spiritual problem requires a list of prayers but knowledge and obedience to certain scriptural principles (in most cases).

For some who do not care about becoming great in life; successful, becoming productive or fulfilling God's purpose for their life, overcoming laziness may be difficult task. So make sure you're not one of those who “simply wants to exist” on earth and return to dust when their lifespan is complete.
Since laziness is a sin, it needs to be confessed and efforts need to be made to overcome and forsake it. Crucifying the flesh is a great step towards overcoming spiritual laziness. Taking responsibility for one's life, actions and decisions will produce self-discipline; and this will go a long way to curb laziness.

Psalm 90:10 KJV
The days of our years are threescore years and ten; and if by reason of strength they be fourscore years, yet is their strength labour and sorrow; for it is soon cut off, and we fly away.

Always remember that time waits for no one; time is short and God instructs us to make the best use of it while we can. Laziness shouldn't be one of the things stopping us from doing so.
If you were blessed reading this article on what the Bible says about laziness, do not hesitate to share it with others.
Remain blessed!