Dream Of Casting Out Demons Meaning 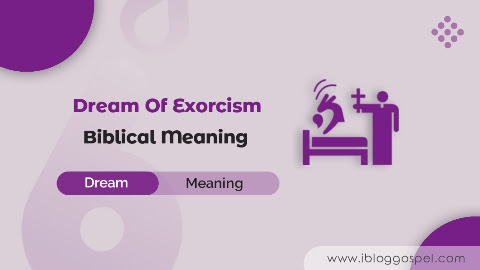 I understand that seeing demons in dreams can be a bit terrifying, but sometimes these dreams reveal very important facts concerning our spiritual life. Today we will learn the meaning of dream of exorcism from a Biblical standpoint.
Many requests have been made asking me to write on the meaning of casting out demons in dreams, so this article comes to fulfil that demand. Have you ever seen a demon in your dream, or seen yourself fighting demons? Then this dream interpretation is for you.
People see diverse kinds of dreams about demons, so our dream interpretation will touch on the following:
What does dreaming about fighting demons by prayers mean ?

Every dream where a person has dominion over evil spirits is always a victorious dreams. Although some often feel it isn't right to dream about demons, but what's actually not good is being defeated by demons in dreams, instead of being victorious over them.

Luke 10:19 NIV
I have given you authority to trample on snakes and scorpions and to overcome all the power of the enemy; nothing will harm you.

The fact is that no Christian is exempt from seeing demonic dreams. No Believer has outgrown spiritual warfare. But the good news is that we have authority over every form of evil—even in our dreams. If you're unable to exercise your authority in Christ over dark spirits in your dreams, then you have every right to be worried.

There are Christians who occasionally or frequently see themselves casting out demons in dreams. This dream is a good omen.
The fact that a demon appeared in your dream does not automatically make it a bad dream. What happens between you and the evil spirit is what determines whether it is a bad dream or not.
For instance, many often see demons attacking them in their dreams while they're always the victim. It often happens that either they are full of fear or they lack energy to attack back. This shows that the dreamer is not in a good state spiritually.

Luke 10:17 ESV
The seventy-two returned with joy, saying, “Lord, even the demons are subject to us in your name!”

The Bible makes us understand that we have been given authority over demons. The Lord's disciples, even before the day of Pentecost, had authority over demons as they went out on evangelism. They came back declaring, “Lord, even the demons were subject to us in Your Name!”
A Christian with a robust spiritual life should have the same influence over evil spirits—both while awake and while asleep.

Mark 16:17 NIV
And these signs will accompany those who believe: In my name they will drive out demons; they will speak in new tongues.

As a genuine and Spirit-filled Christian, it is not strange to see yourself casting out demons in dreams. Light is superior to darkness. It is part of your birthright and function as a blood-bought child of God, to be able to exert a demineering influence on evil spirits and expel them.

If you see yourself casting out demons in dreams, the following are the possibilities:

1. You Have A Vibrant Spiritual Life

The evidence of spiritual vibrancy or lack thereof is often manifest in dreams. That is just one reason why we shouldn't take our dreams lightly. The way we are in dreams (especially when confronted by agents of darkness) has a lot to say about our present spiritual state.
People who are spiritually weak are often scared, attacked and oppressed by demons in their dreams. But if you are the direct opposite of this, then you should be happy and give God the glory.
Dreaming that forces of darkness had power over you in dreams isn't a good thing. It should compel anyone seeing such dreams to work on their spiritual life.

Acts 1:8 ESV
But you will receive power when the Holy Spirit has come upon you, and you will be my witnesses in Jerusalem and in all Judea and Samaria, and to the end of the earth.”

Whereas, dreaming that you were able to exercise authority over demons and cast them out proves that you are filled with the Holy Spirit, you have the power of God and you are advancing spiritually. Keep doing what you're doing in order to grow even stronger in Christ.

2. You Are God's Warrior In God's Army

There is a real battle raging in the unseen realm between the kingdom of God and that of darkness, and every genuine Christian (as a soldier in the army of God) is directly or indirectly involved. That is why you don't necessarily have to offend the enemy before he starts attacking you.

Ephesians 6:12 ESV
For we do not wrestle against flesh and blood, but against the rulers, against the authorities, against the cosmic powers over this present darkness, against the spiritual forces of evil in the heavenly places.

From time to time, a genuine Christian will come under attacks from agents of darkness in their dreams. These attacks can sometimes manifest as demonic attack dreams. This is just part of the warfare manifesting to you. Besides, no genuine Christian outgrows spiritual attacks.

Ephesians 6:13 ESV
Therefore take up the whole armor of God, that you may be able to withstand in the evil day, and having done all, to stand firm.

Because you are God's soldier, you will always come under attacks from the enemy (whether you offend him or not). You must always stay prayed up and ready at all times.

3. You Have A Great And Powerful Calling

Understand that no calling in Christ is inferior. Every genuine Christian has the same Holy Spirit that those they see as “powerful men or women of God” have.
Irrespective of your area of calling into ministry, it is still a great and powerful calling. Every Spirit-filled Christian has the ability to cast out devils and defeat them in spiritual warfare.

Phillipians 3:14 NKJV
I press toward the goal for the prize of the upward call of God in Christ Jesus.

If you frequently see yourself casting out demons in dreams but you're not doing that yet in the physical realm, it is an indication that God will use you mightily in ministry. So go on and identify your calling and start working on it. Press on into the reality of who the Lord called you to be!

If you are someone who frequently sees dreams of fighting demons, this is a sign that the kingdom of darkness sees you as a serious threat to their operations.
It is likely that you have been actively confronting them through spiritual warfare prayers, and they have to intensify their attacks against you so as to weaken and stop you from praying. This is one of their strategies.

Most dreams of fighting demons are just reprisal attacks—due to the fact that a Christian is very prayerful and actively destroying the works of darkness through prayers. But don't let their attacks deter you from praying even more. The One in you is Greater.

Dream Of Exorcising Someone

God uses His submitted vessels in various way, even in their sleep. If you find yourself casting out demons from someone in your dream, it could be what is actually happening in the spiritual realm. God has many ways He uses His servants. He can decide to use them in the physical realm or in the spiritual. This shouldn't sound strange to any spiritual person.
Another possibility here is what I earlier mentioned. Anyone who sees this kind of dreams is in their optimal state spiritually or is seeing what will manifest in their future ministry. They must work towards seeing it come to pass.

Final Words On Dream Of Exorcism

You see, there is no need to become scared or confused on why you see demons in your dreams. There are people who even see such dreams almost every night.
You must understand that we are continually in battle, and sometimes this battle will manifest as dreams of fighting or casting out demons.
If you often don't experience victory against demons in your dreams, then you need to upgrade your spiritual life. Read How To Grow Spiritually.
If you were blessed reading the meaning of dream of exorcism, do not hesitate to share with someone else who might as well find it useful.
God bless you.