Dream Of Being Arrested Biblical Meaning 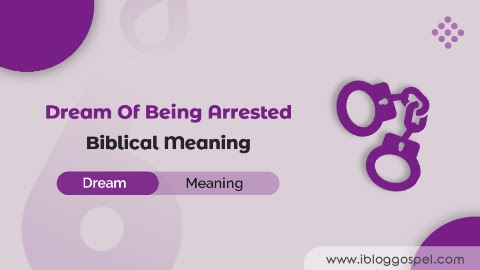 Different kinds of dreams come to different people daily. While some of these dreams are easy to understand, others come laced with many symbols. One of the dreams that often leave many baffled is a dream of being arrested.
Seeing oneself being arrested in dream is undoubtedly one of those dreams worth paying attention to. Those who see these dreams often wake up worried on what happened to them spiritually (or what could likely happen to them in their waking life).
If you've ever gotten arrested in your dream, you're in the right place to understand what such dreams mean. If you stumbled on this article after waking up from a dream of getting arrested, let's trust the Lord to speak to you and provide solution to such dreams through this article.

Isaiah 61:1 NIV
The Spirit of the Sovereign LORD is on me, because the LORD has anointed me to proclaim good news to the poor. He has sent me to bind up the brokenhearted, to proclaim freedom for the captives and release from darkness for the prisoners.

Since dreams of being arrested come in various forms, in this article, we will delve into some of the following:

What does it mean to get arrested in a dream? I'll say, there are many sides to this dream. A dream of being arrested can point to a serious spiritual attack; and at the same time, it can also reveal a future trouble that is coming for the dreamer. I'll explain as we progress.

Biblical Meaning Of Dreaming Of Being Arrested

Dream Of Being Arrested As A Spiritual Attack

The enemy has many devices, but not everyone is knowledgeable on how he operates. One of the most deadly spiritual attacks from the kingdom of darkness often manifests in form of a dream of getting arrested.

Psalm 34:19 ESV
Many are the afflictions of the righteous, but the LORD delivers him out of them all.

Truly, many are the afflictions of the righteous. But in all these things, we are more than conquerors. Here is God's report concerning you:

Isaiah 49:25 ESV
For thus says the LORD: “Even the captives of the mighty shall be taken, and the prey of the tyrant be rescued, for I will contend with those who contend with you, and I will save your children.

Every genuine Christian must understand that they are in a spiritual battle. Whether you are very prayerful or not, as a child of God, you have something that Satan is envious of. From time to time you will face spiritual oppositions from the kingdom of darkness.
The enemy is very strategic and meticulous in his attacks; he makes sure that he leaves no stone unturned. If a Christian is lukewarm today, he fights them hard to make sure they become even more lukewarm—so that they don't even have a chance to rise. If a Christian is on fire for God today, even more intense attacks are launched against them, to ensure their fire is quenched. No wonder the bible warns us to be sober and vigilant!

1 Peter 5:8 NLT
Stay alert! Watch out for your great enemy, the devil. He prowls around like a roaring lion, looking for someone to devour.

Every Christian who sees their self getting arrested in a dream (or facing an attempted arrest in their dream) must understand that they are a serious threat to the kingdom of darkness. For this reason, the enemy desperately wants to put them and their activities in check.
The following are some of the effects from getting arrested in the dream:
You see, the enemy is very wicked. And unfortunately, not everyone understands the adverse effects of seeing their self being arrested in a dream. Some don't even believe such dreams can have a negative impact on their life, until they begin to experience series of problems in their waking life.
I've heard of people who saw themselves being arrested, tied up and tortured, but no one took their dream seriously until the enemy was finally able to terminate their life. Whenever they slept, they saw themselves in the same location, tied up and tortured, yet no one took their dream seriously.
As a Christian, God doesn't expect us to be that unwise. We're in a better place to understand the tactics of the enemy and go on to stop him before he goes overboard. Remember that, through Jesus Christ we have the upper hand.

John 8:36 NIV
So if the Son sets you free, you will be free indeed.

Part of the privileges of being a Christian is your spiritual freedom. The enemy has no right to get a child of God back in his shackles after God had delivered them. You have the authority to thwart every attempt of darkness to get you back in their spiritual chains.

Colossians 1:13 BSB
He has rescued us from the dominion of darkness and brought us into the kingdom of His beloved Son.

As someone who is seated with Christ in Heavenly places, understand the authority and power available to you. Give no room for the enemy to exercise dominion over you in any way.
If you're a Christian and you saw yourself getting arrested in a dream, you should sit up, pray and initiate your deliverance. Further attempts to get you arrested spiritually are suppose to fail if you treat your Christianity seriously.
By right, a child of God should dominate the kingdom of darkness, and not the other way around.

Dream Of Being Handcuffed By Police

Except the dreamer did something wrong that should warrant their physical arrest, a dream of being handcuffed by police doesn't mean the dreamer will get arrested in their waking life.
The dream world is not the physical realm. If we should interpret everything we see there literally, then we will miss it. Police in dreams often represent forces of darkness. If you get attacked or arrested by the police force in your dream, you just came under a deadly attack from high-ranking agents of darkness. You must not take such dreams lightly!

Psalm 68:20 NASB
God is to us a God of deliverances; And to GOD the Lord belong escapes from death.

If you saw a dream of being handcuffed by the police, go into fasting and pray for your deliverance, or ask an Anointed servant of God to pray over you and set you free. What you're never expected to do is to ignore such dreams and go about your business.

Dreaming Of Being Arrested And Escaping

If you saw yourself being arrested in a dream, but you were able to escape, this is victory on your part and a loss to the kingdom of darkness.

But do not fail to acknowledge the fact that the Lord empowered you for this victory. Return all the glory to Him so that you can experience more victory in your dreams.

Dream About Family Member Getting Arrested

If you saw a friend or family member getting arrested in a dream, this might not automatically mean a spiritual arrest. It is wise to find out if your family member is guilty of any criminal offence. You can also go ahead to advise your family member to stay away from anything that could get them in trouble. But most importantly, make you you pray for them, because whatever the case may be, God can deliver them from it.

Prayer Against Dream Of Being Arrested

Final Words On Dream Of Being Arrested

Brethren, now you see that being arrested in a dream is not something anyone should treat lightly. It's even better if we do our best to prevent getting arrested in dreams.
If you always see yourself getting [successfully] arrested in your dreams, you have to step up your spiritual life. Grow above the level where the kingdom of darkness can exercise dominion over you. That is the level every genuine Christian should operate.
If you learned something from reading our Christian dream interpretation, go on and share this article with someone else.
God bless you.