What Does It Mean When You Dream About Finding Money

Finding money in a dream might be a bit confusing. That's why we have written here for you, the biblical meaning of finding money in the dream.
Follow 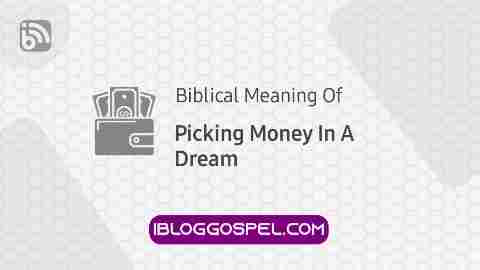 Many have reportedly seen money in their dreams. But money dreams come in various forms. One of the most common dreams about money happens to be dream of picking money from the ground. Have you ever found yourself picking money in a dream? Then brace up as we delve into what it means when you dream about finding money.
It's common for people to assume it is good luck or start thinking miracle money will come to them when they dream about picking money from the ground. But how true is this? We will see the answer in this article.
If you woke up out of a dream of picking up money from somewhere and found this article, I believe you are in the right spot to get the accurate meaning for your dream. Let's trust the Holy Spirit to bring understanding to this dream.

Proverbs 13:11 NASB
Wealth obtained from nothing dwindles, but one who gathers by labor increases it.

Since different people see diverse kinds of dreams about picking money, we will base our dream interpretation on some of the following points:
To pick money on the ground in dream means what ?

Picking money on the ground in a dream is not a good omen. Most times, such a dream is a form of demonic manipulation against the dreamer's finances. If you're frequently seeing yourself picking up money in your dream, I believe the earlier you start praying against such dreams, the better.

A good number of people have cultivated the habit of picking money on the road (or wherever they find a missing money), and then they take ownership of it. But the fact that one found money in a public transit, in a shopping mall or by the road side and picked it does not mean it's theirs. Financial prosperity does not come by going about picking money one didn't work for.
In most cases, the money people find laying about is intentionally dropped by an agent of darkness as a bait to use in trapping people for sacrifices and other evil intents.
Most of those who pick up money from the ground often count themselves lucky and begin thanking God for blessing them, but let's assume they do that out of ignorance. First of all, they do not know the source of the money or who dropped it there. You're not being blessed by God because you saw yourself picking money in a dream. You're actually being manipulated to think it's a blessing, while the enemy hides behind the dream to steal from you the little you already had.
The world is more spiritual than natural or physical. Many destinies have been thwarted and many lives destroyed by people merely picking up money that isn't theirs. If you've been doing this, for your own good, you should put an end to it.
The spiritual meaning of picking money in a dream symbolize the following:
It is a bit safe if someone dreams about receiving money. But even in such a scenario, the type, the look, the quality of money and who gave the money matters a lot. The worse happens when one sees theirself picking money in a dream. Such dreams often portray serious efforts of the kingdom of darkness to the make the dreamer poverty-stricken for the rest of their life.

Biblical Meaning Of Finding Money In A Dream

Picking up money in a dream is like one selling their birthright. See it as a trap set by the enemy to ensnare the dreamer and their finances. The universe isn't rewarding anyone by giving them some random money in their dream.

Proverbs 28:20 ESV
A faithful man will abound with blessings, but whoever hastens to be rich will not go unpunished.

If anyone sees a dream where they found a strange money somewhere and picked it, they must understand that the beggar spirit, spirit of poverty and devourer spirit is at work against them.
By right, if God were to bless the dreamer, He would give them better dreams about finances. Not dreams of them picking things from the ground like a lunatic. That's somewhat degrading. The blessings of God do not come that way.

Proverbs 13:11 ESV
Wealth gained hastily will dwindle, but whoever gathers little by little will increase it.

See it as you're actually losing your real money into the hand of a devil when you pick up money that actually doesn't exist, in a your dream.
If you happen to find money without an owner (be it in the physical or in a dream) it would be wise to not pick and make it your own. Now you know that this is one of the antics of the enemy (especially in dreams), so do not fall for it.
For better understanding, here are some more reasons why it is wrong to pick money in a dream:

Money Picked From The Ground Is Ill-Gotten

We can classify such monies as “ill-gotten” wealth (according to scriptures). Now see what the Bible says about such forms of wealth:

Proverbs 1:19 NIV
Such are the paths of all who go after ill-gotten gain; it takes away the life of those who get it.

If ill-gotten wealth can take away the life of those who go for it, then we should avoid it even in dreams. This is more spiritual than physical.

It Portrays Haste And Impatience

Some people have great promises from God that they will prosper financially, but unfortunately some are too impatient to wait for the manifestion of those promises.

Proverbs 20:21 NIV
An inheritance claimed too soon will not be blessed at the end.

If the dreamer is someone who is impatient and ready to make money by all means, they create an open door for the enemy to launch attacks (through dreams of picking money) against the financial breakthrough which God promised them.

1 Timothy 6:9 NLT
But people who long to be rich fall into temptation and are trapped by many foolish and harmful desires that plunge them into ruin and destruction.

If you picked money in a dream, remember you didn't labour for it. It's like stolen money or riches gained by unjust means.

Jeremiah 17:11 NIV
Like a partridge that hatches eggs it did not lay are those who gain riches by unjust means. When their lives are half gone, their riches will desert them, and in the end they will prove to be fools.

Besides, such dreams have a lot to speak concerning the dreamer—whether they could wait for the manifestion of God's blessings upon their life or they would actually steal if they saw the opportunity.

What To Do To Stop Picking Money In Dreams

Prayer Against Picking Money In The Dream

If you found money in your dream, there's always likely nothing to show that it is your money. Finding such money is like finding a grenade that lays in wait for someone to touch it so it can explode and harm them.
If you're someone who frequently picks money in dreams, you need to ask yourself this question: How rich am I in the physical world? Very rich? I'm sure you have the answer always.
Do not fall for the trick of the enemy to further frustrate you with such dreams. Always pray against dreams of finding and picking money.
If you were blessed reading this dream interpretation, do not hesitate to share with someone else who might find it useful as well.
God bless you.