Home
Christian Dream Dictionary
Meaning Of Fighting In A Dream

Spiritual Meaning Of Fighting In A Dream

If you saw yourself fighting in the dream, or someone fighting you in dreams, here is the biblical meaning of your dream.
Follow 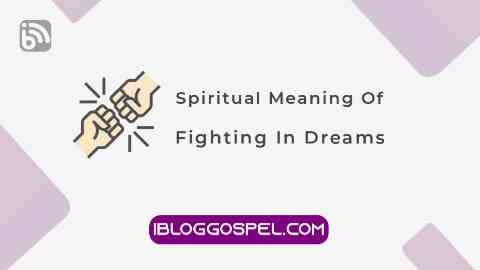 It is not uncommon for people to see themselves fighting in dreams. Apparently, these dreams can be very disturbing, especially when the dreamer can't readily figure out their meaning. If you've ever seen a dream about fighting someone or eager to know the meaning, then join us today let's explore the spiritual meaning of fighting in a dream.
Different people see different dreams about fighting. Some see themselves fighting an unknown person; some see dreams of fighting many strange people; while others often see themselves fighting someone they know. Due to the diversity in which these dreams occur, we will treat our the meaning of dreams about fighting under some of these headings:
First of all, I'll like to point out that fighting someone in a dream does not always mean you will actually have a fight with someone when you wake up. That rarely happens. Dreams tell more about what is happening in the unseen realm than in the physical.
Do you often see yourself fighting people in dreams? It is high time you treat these dreams as very serious, because they reveal a lot that is going on in your life spiritually. Remember that what we see in dreams have the ability to influence our waking life in one way or another.
If you saw a dream about fighting, the import question is, were you victorious or not? This factor alone has a lot to reveal concerning your dream. Fighting in the dream may be a good or bad omen, this most especially depends on whether you were victorious or not.

Isaiah 49:25 BSB
Indeed, this is what the LORD says: “Even the captives of the mighty will be taken away, and the plunder of the tyrant will be retrieved; I will contend with those who contend with you, and I will save your children

Fighting is any form of violent struggle or contention between two or more people. Fighting happens in various forms, and it doesn't always involve hitting one another.
When talking about fighting, we look as various aspects like...
Not all fighting dreams that people see always has to do with hitting each other. A dream about fighting may come in form of a brawl or an actual fist fight. In either way the fighting dream may show up, the dreamer must understand that there is a spiritual opposition raised against them. If this is you, hear God's report concerning you today:

Isaiah 59:19 KJV
So shall they fear the name of the LORD from the west, and his glory from the rising of the sun. When the enemy shall come in like a flood, the Spirit of the LORD shall lift up a standard against him.

If you always see someone attacking you in your dreams, I pray that this scripture becomes a reality in your life, in the Name of Jesus Christ.

Biblical Meaning Of Fighting In A Dream

As far as I know, fighting in a dream is one of the most frequent spiritual experiences in the life of many Christians. This is so for many reasons. If you always see yourself fighting in dreams, a number of things are possible:
It is interesting to know that from the day of John the Baptist till now, the kingdom of God suffers violence. That means the emergence of the Saviour in the flesh caused a major uproar in the enemy's kingdom. Our Lord Jesus Christ said that He didn't come to bring peace but a sword (Matthew 10:34).
Spiritual attacks intensified! If you're a child of God, you must always remember that you will come under intense spiritual attacks from the enemy (including some that manifest as fighting in dreams). You must always stay prepared for the enemy's opposition even in dreams.

Matthew 11:12 NKJV
And from the days of John the Baptist until now the kingdom of heaven suffers violence, and the violent take it by force.

Violence isn't God's way of doing things, but since Satan and his cohorts always attempt to do beyond their ability, Heaven as well always responds with violence—a higher, greater and domineering dimension of violence. At the end of the day, the lower power submits to the stronger.
Jesus Christ isn't called the Lion of the tribe of Judah for nothing. As calm and humble as He is, there is an aggressive and overpowering facet of Him that makes Him the number one threat to enemy and his cohorts.

Isaiah 42:13
The LORD shall go forth as a mighty man, he shall stir up jealousy like a man of war: he shall cry, yea, roar; he shall prevail against his enemies.

If our God is the Lion whose roar sends shockwaves down the depths of Hell, we as His offsprings shouldn't be different either. Every Christian should be the victors and not victims in fighting dreams. You should be the violent who seizes victory by force!

Dreams About Fighting An Enemy

Do not see it as something strange if you see dreams of fighting an enemy. Many Christians all around the world are seeing these dreams. Be aware that we are fighting a common enemy.

1 Peter 5:8-9 NIV
Be alert and of sober mind. Your enemy the devil prowls around like a roaring lion looking for someone to devour. Resist him, standing firm in the faith, because you know that the family of believers throughout the world is undergoing the same kind of sufferings.

It doesn't really matter if it is a demon or an evil person who attacked you in your dream, what matters is that the Lord has enabled you for victory in such dreams. If you're not experiencing victory in your dreams, then there's something wrong somewhere in your walk with God. You can fix it.

Dreaming About Fighting Someone And Winning

Being a genuine Christian gives you an edge over the enemy and his devices. Living a life that pleases God further enables you for victory and dominion over your adversaries.

Luke 10:19 ESV
Behold, I have given you authority to tread on serpents and scorpions, and over all the power of the enemy, and nothing shall hurt you.

So there's nothing strange in dreaming about fighting someone and winning. What a Christian should be worried about is when the reverse is the case.
When you see dreams of fighting and winning, you should rejoice and glorify God for Anointing and enabling you for victory in spiritual warfare.

Spiritual Meaning Of Beating Someone In A Dream

This is also a sign of victory. It is evident that you can exercise your dominion in Christ even in the spirit realm.

It is unwise to quickly conclude it's actually your family member after seeing such dreams. Although I'm not denying that possibility, but we should be more focused on being victorious.

How To Experience Victory In Fighting Dreams

If you've occasionally been the victim of spiritual confrontations in dreams, it is totally wrong to continue that way. It's time to start preparing yourself to dominate the kingdom of darkness in your dream life.

Step Up Your Spiritual Life

Oftentimes, not experiencing victory in dreams is a sign of spiritual weakness. You must make deliberate efforts to become stronger spiritually (with God's help of course). So go on and apply the following steps:

Prayer Against Fighting In The Dream

No serious Christian needs to pray to stop seeing dreams where someone confronted or fought them. Praying such prayers is like telling God you're afraid of the enemy. No Christian also outgrows spiritual warfare. Instead, you should be equipped and ready. You can get my book, Anointed For Battle on Amazon to help equip you for victory in spiritual warfare.
Alternatively, you should read these articles:

Final Words On Meaning Of Fighting In Dreams

There it is, beloved! I trust that you found and understood the spiritual meaning of fighting in a dream through this article.
If you need a personal dream interpretation relating to this, feel free to message me. Otherwise, share your similar dreams in the comments section.
God bless you!