Spiritual Meaning Of Cats In Dreams 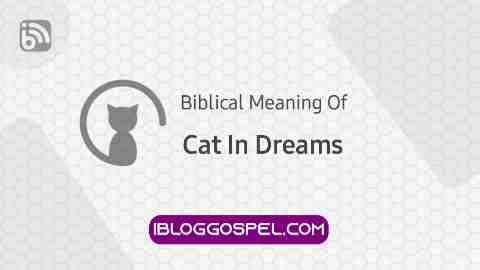 I have received many dream interpretation requests and one of the most pressing ones happens to be the meaning of cats in dreams. So sit tight as we explore the spiritual meaning of cats in dreams, from a Christian perspective.
I understand how it feels waking up from a strange dream about cats. I can also tell that seeing cats in dreams (especially black cats) do not produce a pleasant feeling. Most times, these dreams are filled with fear. There is always this eerie feeling attached to most cat dreams.

2 Corinthians 2:11 NIV
In order that Satan might not outwit us. For we are not unaware of his schemes.

If you just woke up from such a dream and stumbled on this article, I believe you're at the right place. Today we will delve into the spiritual meaning of cats in dreams under some of the following subheadings:
Most dreams about cats are often a bad omen. I'm yet to hear about a dream where cats showed up and it was a good and godly dream.

Make no mistake about this: all animals that God created were good (according to scriptures). The Bible says that God looked upon the creation and saw that it was all good (Genesis 1:31).
It was the entrance of evil and Satan into the world that brought about corruption and tend to revert the goodness in all that God made. Take for instance, it is only when the enemy showed up and possessed the serpent that snakes began being portrayed in a bad light. Satan himself is called the ancient serpent which deceives the whole world (Revelation 12:9).
Even today, agents of darkness still possess certain animals or use their image to perpetrate evil. They carefully make the choice of the animals whose image they will use, and there is a secret behind this.
I have noticed that Africans are more sensitive to dreams about cats as being a bad omen, compared to many in other parts of the world. This is because we are familiar with the antics of the kingdom of darkness; we know the footprints of the enemy.
Even in this physical world, there always tends to be something sinister about cats—that's a feeling no one can easily deny. This isn't me saying that if you have a cat as pet, you should go discard them. But as for the strange cat you keep seeing tracking, trolling, monitoring and attacking you in your dream, you should send it packing as soon as possible!
Why is the cat a favourite animal that the kingdom of darkness prefer to masquerade as, and go about doing evil? It is for some of the following reasons:
If you look closely, you'll notice that all of these fit perfectly with the operation of darkness.
Dreams about cats are not common, except when one becomes a target of darkness. When a person is marked for takedown by the kingdom of darkness, it is not uncommon for them to start seeing cats following them, watching them closely or attacking them in dreams. Do not take such dreams lightly.

Biblical Meaning Of Cats In Dreams

Cats are not expressly mentioned in the Bible, but we are not without clues. We aren't ignorant of the devices of the enemy.
The symbol of the cat is a favourite in witchcraft covens. Whenever a person begins to see cats in their dreams, they must understand that the witchcraft department of the kingdom of darkness is out and on a mission against them.
Simply put, seeing cat in the dream means
There are people who often see a cat in their dreams staring at them from their window, and in most cases, such dreams often precede terrible nightmares. Do not assume there is not connection between these things.
If you are seeing cats appearing and trolling or attacking you in your dreams, you must understand that they are not ordinary cats. In most cases, they are human agents of darkness on assignment against the dreamer. Their mission is to take down the dreamer through diabolic means.
Whenever you see a cat in your dream, it is likely that you are just about to experience one of the most troubling nights. Instead of continuing to sleep, it is better to force yourself awake and start praying immediately—war in the spirit against witchcraft powers assigned against you.

Dream About Cats Attacking You

If you see a cat attacking you in your dream, you just came under a serious witchcraft attack. This dream often proves that there is an active assignment from a witchcraft coven against the dreamer. But here is God's report to you concerning this:

What does black cats symbolize ? Sometimes one might see a black cat monitoring, following them everywhere or attacking them in their dream. This is simply the kingdom of darkness coming out plain to admit, “Yes, we're on a mission against you. We're here to destroy you.”
Sometimes, it could be that the dreamer is too busy to understand that there is an ongoing spiritual attack against them, but if you happen to see black cats trolling and annoying you in your dreams, it is high time you sit up and start praying ruggedly.

Just before an actual attack is launched, there are people who see an angry cat in their dream staring at them with a face full of fury. In most cases, these dream mean that there is an agent of darkness the dreamer offended or one that is envious and mad at the dreamer because of one reason or the other. This person has taken the hate to the spirit realm and decided to attack the dreamer.
Also remember that you don't have to do anything wrong for the enemy to hate you. Being a child of God is enough reason for agents of darkness to hate you. But rest assured, the One who is in you in greater.

Prayer Against Witchcraft Cats In Dreams

If you need more prayers against witchcraft attacks, then you should see Prayers Against Household Witchcraft.

Final Words On Dreams About Cats

The Bible makes us understand that our Lord Jesus Christ manifested so that He will destroy the works of the enemy (1 John 3:8). He has also delegated this authority to us as well. We're more than conquerors!
Whenever you start noticing the activities of darkness against you via cat dreams, there is no need to fear, but rise up to fast and pray. Then watch the Lord fight for you.
Beloved, I believe you've gotten a clear understanding on the spiritual meaning of cats in dreams from this article. If you were blessed, do not hesitate to share with someone else you know might need to read it also.
God bless you!