Biblical Meaning Of Killing A Snake In A Dream 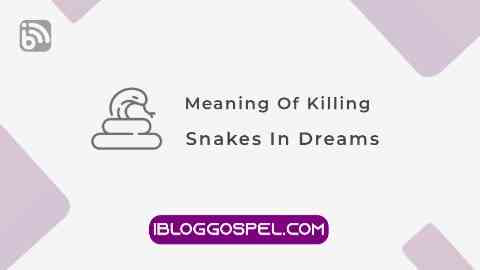 A dream about snakes is one of the most disturbing dreams that many see. I'm aware that both Christians and non-Christians see dreams about snakes. Snake dreams come in various forms, and one of them is what we will explore in this article today. Follow up as we decipher the biblical meaning of killing a snake in a dream, by the help of the Holy Spirit.
I understand that seeing snakes in dreams may be a scary experience to many. A good number of us don't desire to see such dreams; but if it probably comes, it is important we know what it means and what to do about the dream.
If you woke up from dreaming of killing a snake and stumbled on this article, I believe you're in the right place to understand the biblical meaning of your dream. Sit tight as we go on this adventure, to discover what it means to kill a snake in a dream.
We will explore our dream interpretation under some of the following subheadings:
Most dreams about snakes are always a bad omen, but dreams about killing snakes happen to be the exception.

Genesis 3:14 KJV
And the Lord God said unto the serpent, Because thou hast done this, thou art cursed above all cattle, and above every beast of the field; upon thy belly shalt thou go, and dust shalt thou eat all the days of thy life.

What does it mean to dream of killing a snake? The simple answer here is that killing a snake in a dream is a good omen—a sign of being victorious in spiritual warfare.

Killing A Snake In A Dream Meaning

If you make a thorough research concerning snakes in scriptures, you will discover that snakes are not portrayed in a good light. This is due to the corruption that the enemy wrought in the world through the serpent.
From a physical standpoint, all that God created was good (including snakes). But from a spiritual standpoint, snakes do not symbolize anything good but evil.

Genesis 49:17 NIV
Dan will be a snake by the roadside, a viper along the path, that bites the horse’s heels so that its rider tumbles backward.

Notice in the above scripture that snakes are said to be harmful to both mankind and other animals. You'll also agree with me that even when snakes are tamed, they are rarely friendly. A mere sight of a snake brings fear (Exodus 4:3).

Since the personality of the serpent is destructive, with that, we can easily connect the dots. It is the enemy and his cohorts who bring destruction (John 10:10a). That is why whenever snakes show up in your dream, you must understand that you've come under a serious spiritual attack from the kingdom of darkness.
To be more specific,
If you see yourself killing snakes in dreams, then it means God had enabled you for victory against your enemies in that dream.

Killing A snake In Dream Is Good Or Bad

The holy scriptures make us understand that we've been given authority and power over serpents—to crush them under our feet and nothing will harm us (Luke 10:19). This scripture isn't talking about physical snakes but the enemy, his cohorts and their works.

Psalm 91:13 NLT
You will trample upon lions and cobras; you will crush fierce lions and serpents under your feet!

So, yes of course, killing a snake in a dream is a good omen. As Christians, we are equipped to be the victors and not victims of spiritual warfare.

Someone Else Killing A Black Snake In Dream

We must understand that a fierce battle is always raging in the unseen realm, and this battle is for the souls of men. Sometimes, we may notice the manifestion of this battle in our dreams. One of such dreams is a dream about someone else killing a snake.

Psalm 91:11-12 NIV
For he will command his angels concerning you to guard you in all your ways; they will lift you up in their hands, so that you will not strike your foot against a stone.

If you found someone else killing a snake in your dream, it is either the Lord Himself or the Angel of the Lord engaging in spiritual warfare on our behalf.

Killing Snake In Dream During Pregnancy

From the onset, the enemy had always been after the seed of the woman. The creation of man is one of the things which Satan hated the most, and one of those things which propelled him into rebelling against God.

Genesis 3:14-15 KJV
And the Lord God said unto the serpent, Because thou hast done this, thou art cursed above all cattle, and above every beast of the field; upon thy belly shalt thou go, and dust shalt thou eat all the days of thy life: [15] And I will put enmity between thee and the woman, and between thy seed and her seed; it shall bruise thy head, and thou shalt bruise his heel.

If a pregnant woman sees herself killing a snake in her dream, it is likely that the enemy tried to tamper with the seed in her womb, but the Lord gave her victory over this spiritual attack. There's nothing to worry about but praise God for this victory!

Cut Off The Head Of The Snake Dream Meaning

If you see yourself in a dream cutting off the head of a snake (or you saw a head-less snake in a dream) this is a very good omen! This dream means that the enemy and his agents assigned against you have been subdued and defeated by the power of God. Give thanks to the Almighty!

Beloved, I hope you now understand the biblical meaning of killing a snake in a dream. If you're seeing such dreams, it's possible that you are very prayerful and the Lord has Anointed and enabled you for victory in spiritual warfare. Keep doing what you're doing and keep on ascending greater spiritual heights!
If you desire to learn more about the meaning of snakes in dreams and get relevant prayer points, then read Biblical Meaning Of Snakes In Dreams.
God bless you!