Home
Teachings
What Is The Fast Of Daniel

What Is The Fast Of Daniel

People often talk about the fast of Daniel. But what really is it? Let us learn about the Daniel fast from the scriptures.
Follow 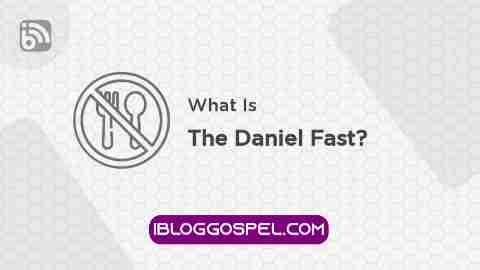 The fast of Daniel happens to be one of the most widely accepted religious practices, even among many other religions apart from Christianity.
Most of us know fasting to be a spiritual practice, but Daniel Fast (to be precise) is a kind of vegan dieting that is practiced by different categories of people — not just for spiritual but also health-related reasons.
It is true that the Fast of Daniel stemmed from the Christian Bible, but different people from different walks of life have adopted this practice due to its health and spiritual benefits.
I'm sure someone reading this must had been eager to know more about the fasting of Daniel. So join us today as we explore what the Daniel Fast is all about, as much as the Holy Spirit provides the insights.

What Is the Daniel Fast

The Prophet Daniel (Belteshazar) was among those chosen according to the command of king Nebuchadnezzar to work in the king's palace. This choice was based on the excellence of wisdom and vastness of knowledge each candidate possessed (Daniel 1:3-4).
But before the chosen ones could appear before the king, they were required to be fed the king's meal for three years — for the purpose of their nourishment. The king didn't want any of them appearing before him looking malnourished.
This decision did not sit well with Daniel. Having the same meal and wine the king had was something too lofty (and carnal) for Daniel. It's most likely that the Spirit of God in him objected to it. The Bible tells us that Daniel made up his mind to not defile himself with king Nebuchadnezzar's food (Daniel 1:8). He instead insisted on having a plant-based diet.

Daniel 1:11-12 KJV
Then said Daniel to Melzar, whom the prince of the eunuchs had set over Daniel, Hananiah, Mishael, and Azariah, [12] Prove thy servants, I beseech thee, ten days; and let them give us pulse to eat, and water to drink.

The term “pulse” as mentioned in the King James Version of the Bible here simply stands for “bean and other seeds grown for food.” We can say literally that Daniel opted for vegetables and water throughout the days of his preparation to appear before the king. This was how the Daniel Fast came about.

What Is Daniel Fasting 21 Days

From what has been said so far, it's safe to say that the Daniel Fast was somewhat restrictive. Before a fast could be said to be a Daniel kind of fasting, it must be based on the following:
Daniel had to place himself on this plant-based diet throughout the days that the king commanded. But according to scriptures, just after 10 days of Daniel restricting himself to eating pulse and drinking water, the result was already evident! Daniel appeared much healthier than those who were placed on the king's diet. For this reason, the prince of eunuchs in charge was compelled to adopt the Daniel Fast also for the other candidates (Daniel 1:16).

What Is The Daniel Fast Diet

Below you'll find a list of foods to eat and those to avoid as recommended under the Daniel Fast Diet.

Foods To Eat During Daniel Fast

Foods To Avoid During Daniel Fast

The stories that brought about the advent of Daniel Fast can be found in the Book of Daniel Chapters 1 and 10. For better understanding, I recommend you read the chapters for yourself.

Did Daniel Fast For 21 Days

It's needful we know the difference between the rule set by king Nebuchadnezzar for those chosen to appear before him AND Daniel's 21-day fast.
There were two separate events in which Daniel opted for a plant-based diet. The first happened when he was chosen to work in the king's court (Daniel Chapter 1). The instruction from the king was to place the chosen ones on a royal diet for three years. This tells us that Daniel opted for pulse and water for three years.
The second time we saw Daniel opting for a plant-based diet was in Daniel 3. This is where he fasted for three weeks (21 days) and it was strictly for a spiritual purpose:

Daniel 10:1-3 KJV
In the third year of Cyrus king of Persia a thing was revealed unto Daniel, whose name was called Belteshazzar; and the thing was true, but the time appointed was long: and he understood the thing, and had understanding of the vision. [2] In those days I Daniel was mourning three full weeks. [3] I ate no pleasant bread, neither came flesh nor wine in my mouth, neither did I anoint myself at all, till three whole weeks were fulfilled.

The term “Daniel Fast” has more to do with the kind of diet Daniel placed himself on during these two separate events, not the number of days. Which means that the Fast of Daniel can be more than 21 days. But for spiritual reasons, most people (especially Christians) prefer practicing the 21 days of Daniel Fast.

Why Did Daniel Fast 21 Days

The decision of Daniel going on a fast for twenty-one days was solely for the purpose of communing with God and inquiring a thing from Him. He was praying and spending time with the Lord during those 21 days (Daniel 10:2). It wasn't for health-related reasons as we saw in the event where king Nebuchadnezzar was involved.

Daniel 10:12 KJV
Then said he unto me, Fear not, Daniel: for from the first day that thou didst set thine heart to understand, and to chasten thyself before thy God, thy words were heard, and I am come for thy words.

As Christians, I believe the 21-Day Daniel Fast is a great option for us — a medium through which we can commune with God, inquire a thing from Him and grow spiritually.

Benefits Of The Daniel Fast

Both spiritually and health-wise, the Daniel Fast has amazing effects on everyone who practices it.

Health professionals will always recommend fasting as one of the best practices to get rid of toxins from the body. Fasting in general is very effective in dealing with toxins.
Apart from that, engaging in the Daniel Fast is a powerful way to set oneself apart and reconnect with God to commune with and receive from Him. As Christians, it's unwise to neglect such a spiritual adventure.
For more on the benefits of fasting and prayer, I suggest you read The Importance Of Fasting And Prayer.

During the Daniel Fast, it's likely that you've denied yourself most rich foods and positioned yourself to hear from God, so the spiritual self becomes elated and you're definitely going to experience heightened spiritual sensitivity. This is as a result of a spiritual alignment with God that has been established through fasting. When this happens, it's possible to begin receiving visions, just like in the case of Daniel.

Daniel 10:2-6 KJV
In those days I Daniel was mourning three full weeks. [3] I ate no pleasant bread, neither came flesh nor wine in my mouth, neither did I anoint myself at all, till three whole weeks were fulfilled. [4] And in the four and twentieth day of the first month, as I was by the side of the great river, which is Hiddekel; [5] Then I lifted up mine eyes, and looked, and behold a certain man clothed in linen, whose loins were girded with fine gold of Uphaz: [6] His body also was like the beryl, and his face as the appearance of lightning, and his eyes as lamps of fire, and his arms and his feet like in colour to polished brass, and the voice of his words like the voice of a multitude.

It Deepens Your Spirituality

The Daniel Fast is a sort of self-denial. If you go through scriptures you'll discover that self-denial is a path to gaining more of God.

Philippians 3:8 KJV
Yea doubtless, and I count all things but loss for the excellency of the knowledge of Christ Jesus my Lord: for whom I have suffered the loss of all things, and do count them but dung, that I may win Christ.

John 3:30 KJV
He must increase, but I must decrease.

Romans 12:1 KJV
I beseech you therefore, brethren, by the mercies of God, that ye present your bodies a living sacrifice, holy, acceptable unto God, which is your reasonable service.

The Daniel Fast is a powerful way to crucify the Flesh and make room for Christ to fill us with more of Himself. Prioritising your relationship with God over the many pleasures of food may just be exactly what you need in order to attain greater heights in God. Apparently, no one who engages in a Daniel Fast For spiritual purposes comes out the same.

Final Words On The Daniel Fast

If you stumbled on this article, it is likely that you are on a fast or you are about to go on fast. I trust that this article served as a great guide to give you an effective fasting. You might also want to read Things To Avoid When Fasting And Praying.
During the beginning and second half of each year, most Christians often go on a 21 day fasting and prayer, but the truth is that most do not eat plant-based diet only. If this is you, no worries, because God understands. Just make sure you complete your twenty-one days fast.
If you found this article helpful, kindly share with others.
Thanks for reading and God bless you!