Home
How To Quit Vaping

How Long Does It Take To Quit Vaping

Quitting vaping may be a bit difficult, but it is not impossible. Here is a guide on how to quit vaping.
Follow 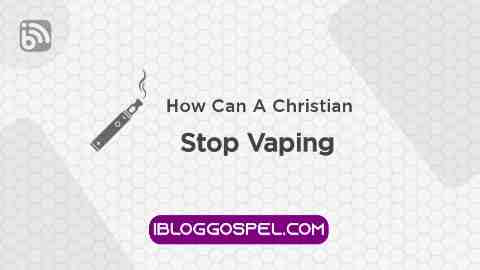 I understand that any topic that has to do with an addiction is often a very delicate (and sometimes controversial) one. Today we'll talk about vaping and how to quit vaping.
Most Christians already know that drinking and smoking is a sin; some even go as far as fasting and praying to quit smoking. But what about vaping? Is it something a Christian should do or continue doing?
Vapes (also known as electronic cigarettes) are battery-powered smoking devices. Vape pens are designed to make inhaling its content smoother, thereby making vaping more addictive and even harder to quit, compared to regular cigarettes.
Recently, there's been tons of adverts on the internet promoting how safe vaping is, than regular cigarettes. But I can tell that it's just another marketing strategy to make people continue in the same old habit — but just in a different way. It's like selling out poison repackaged as sweets.
Contrary to popular opinion, e-cigarettes are not healthier or safer in any way. They were created just to make nicotine and tobacco smoking easier. The destructive effects are still present and even more disastrous.
Research confirms that vaping can make asthma and other existing lung diseases worse. Breathing in the harmful chemicals from vaping products can cause incurable lung damage, lung disease and, sometimes, death.
As you can see, a vape is just an advanced medium for smoking. There are Christians who after quitting smoking, switched to vaping (with the belief that it's much safer than the regular cigarette). But doing a wrong thing in a smarter way doesn't make it right. It in fact, aggravates it.

Is Vaping A Sin?

Every form of unhealthy addiction is a sin. Anything that man does to himself that has life-threatening effects on him does not please God. It is outside of the will of God for him. Because our body is the temple of God and the Spirit of God dwells in us, we are not expected to destroy that temple by taking harmful substances into our body.
Addiction takes away self-control; one of the most vital virtues that every Christian should possess. Anyone who doesn't have self-control sins against God willfully and without remorse. If a Christian loses their self-control due to vaping, then simply put, they're at the verge of becoming a candidate of Hell.
The point here is that it's not really about whether vaping is a sin or not. If one finds it difficult to have and exercise self-control over things that could destroy them (like vaping), it therefore means that they can do even worse things that could lead to their eternal damnation. The Bible says that anyone without self-control is like a city whose walls are broken down (Proverbs 25:28).

Does Vaping/Smoking Make You A Bad Christian?

It is true that the Bible doesn't address certain things directly, but it tells us about a thing called conscience. The conscience is a powerful thing that God gave to man.
God made it in such a way that, if a man does something wrong, their conscience will let them know what they just did is wrong. If someone lives a life that is contrary to the Word of God, they don't need a prophet to tell them that they're not living right. Deep within them, they know it. Their conscience blames them.
When a person lives right, their conscience is pure. There's no feeling of guilt. God wants us all to have good conscience.

Hebrews 13:18 KJV
Pray for us: for we trust we have a good conscience, in all things willing to live honestly.

If your conscience keeps on telling you that certain things you're doing aren't right, simply put, you should repent and stop doing those things. The sad part is that there are people who intentionally keep on ignoring the voice of their conscience and end up having it seared.

1 Timothy 4:2 KJV
Speaking lies in hypocrisy; having their conscience seared with a hot iron.

With a seared conscience, no one accepts their wrongdoings no matter how many times their inner voice tells them they're wrong. This is not a good place for anyone to be.
Apparently, it is not about whether vaping makes you a bad Christian or not. It seems in our world today, people care more about being bad or good than living right in order to please God. If your conscience keeps on telling you that vaping is wrong or you're messing up your life and relationship with God by vaping, then you just have to listen and quit it.

Below are some major steps anyone can take toward quitting vaping. If you're struggling with quitting vaping, you need to take these options seriously, apply them and watch for the results.

Get Saved And Filled With The Holy Spirit

The first step to overcoming any form of addiction is getting saved. Very few people have the ability to overcome addictions without a spiritual help. The power to overcome will have to come from God, this is why becoming a Christian is mandatory. If you haven't yet welcomed Jesus Christ into your life as your personal Lord and Saviour, go on and pray this salvation prayer.
The second most important step is to get baptised in and filled with the Holy Spirit. Every genuine Christian needs the help of the Holy Spirit to overcome the challenges in their life. Overcoming vaping will require that one is filled with and empowered by the Holy Spirit to do just that. You might want to see How To Receive The Baptism Of The Holy Spirit and How To Know If You Are Filled With The Holy Spirit.

Have And Excercise Self-Discipline

Spend More Time With God And Less Time On Frivolities

Like the saying goes, “an idle mind is the devil's workshop.” But idleness isn't always about doing nothing. Sometimes it's about doing things that are not going to help one achieve their goals in life; self-indulgence. Be intentional about spending quality time with God daily. At first it might might not be pleasing to the flesh, but it's better than just going on to do whatever you want with yourself. Going out with friends who are vaping while you're trying to quit vaping is not a wise choice.

If You Fail The First Time, Try Again

Below are carefully selected powerful Bible verses that can help you in your efforts to quit vaping.

Ephesians 4:22 KJV
That ye put off concerning the former conversation the old man, which is corrupt according to the deceitful lusts.

Hebrews 12:1 KJV
Wherefore seeing we also are compassed about with so great a cloud of witnesses, let us lay aside every weight, and the sin which doth so easily beset us, and let us run with patience the race that is set before us.

John 15:5 ESV
I am the vine; you are the branches. Whoever abides in me and I in him, he it is that bears much fruit, for apart from me you can do nothing.

Matthew 19:26 KJV
But Jesus beheld them, and said unto them, With men this is impossible; but with God all things are possible.

At the end of the day, it's not about “how long does it take to quit vaping”, it's about whether or not one is willing to quit it. That will go a long way to determine how fast one can quit it or how long the habit lingers.
I believe that if anyone is willing to quit any form of addiction and goes on to make efforts to quit it, the Lord will help them do just that.
If you were blessed reading this article, remember to share with someone else who might also need it.
Thanks for reading and God bless you.