Biblical Meaning Of A Goat In A Dream 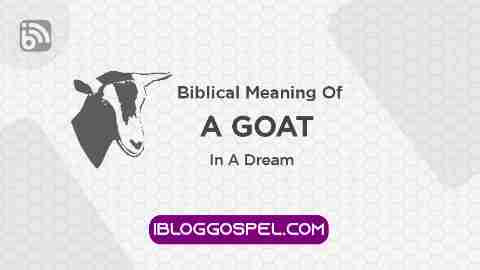 There are people who occasionally or constantly see goats in their dreams. Today, we're going to explore the biblical meaning of a goat in a dream.
I'm sure that if you once saw or have been seeing goats in your dreams, you've been searching for an accurate, scriptural interpretation for these dreams. You don't need to worry no more. Let's trust that by the time you're done reading this dream interpretation article, you will get a better understanding on what goats represent in dreams.
From my personal findings concerning this dream, I've discovered that so many people are seeing dreams about goats. Surprisingly, goat dreams are one of the most popular dreams that many see; and for some, these dreams come even more frequently. Examples of some dreams about goats that people are dreaming about include the following:
These are just to mention but a few. There are some who have reportedly seen a talking goat in their dreams. In some cases, the goat was seen to be living in the same apartment with them in their dream. Understand that dreams that have to do with goats are very serious dreams and should not be taken lightly.

I'm sure that seeing a goat in a dream never comes with a good feeling. These dreams even raise more concerns when they happen to be recurring.
When you go through scriptures, one of the things that stands out concerning goats is that they are not portrayed in a good light. Even in the four Gospels where our Lord Jesus Christ made mention of goats, He didn't say something nice about them (Matthew 25:31-33). Note that this does not mean that God created goats to be evil. No animal is evil, but it is what some animals represent spiritually that can sometimes be evil. For instance, snakes are not evil but what they represent spiritually is evil. In scriptures, goats predominantly have a connotation with Satan or evil. For better understanding, we'll discuss more on this in the next subheading below.
The appearance of a goat in a dream does not bring good tidings. There are people who have seen a dream where a goat was watching them. In some of those dreams, the goat was right in their room! Such dreams should definitely rouse curiosity in anyone.
Some have seen dreams where a goat was talking to them or tried possessing them. I think that's clearly not a joke! It's no ordinary dream and it's not a dream anyone should allow to continue.

During the observance one of the most popular Jewish holidays, Yom Kippur (also known as day of Atonement), two goats are often used. The high priest would lay his hand on one of the goats (the azazel goat), symbolically placing or transferring the sins of Israel on it.
After this is done, this particular goat has to be driven into the desert, signifying that Israel's sin has been driven into the desert, never to be attributed to them anymore. In this case, the goat, azazel, which was used for this “sin placing” represented Satan or evil. See Leviticus 5:6, Leviticus 9:3, Numbers 7:16, Numbers 15:27, Numbers 7:17 for more information on this.
It was a rule of thumb that the azazel goat must be driven into the desert after all sins were placed on it. Also remember that after the baptism of Jesus Christ, He was led by the Holy Spirit into the desert where He met Satan and was tempted by him (Matthew 4:1). Also recall where Jesus said that when an evil spirit leaves a person, it goes into the desert, seeking rest but finding none (Matthew 12:43 NLT). All of these are not a coincidence.
In one of the parables of our Lord Jesus Christ where He talked about His second coming, it wasn't also a coincidence that He used the sheep and goats as analogy.

Matthew 25:31-33 KJV
When the Son of man shall come in his glory, and all the holy angels with him, then shall he sit upon the throne of his glory: [32] And before him shall be gathered all nations: and he shall separate them one from another, as a shepherd divideth his sheep from the goats: [33] And he shall set the sheep on his right hand, but the goats on the left.

In this parable, Jesus literally spoke on the destination of the saved and unsaved. But, wonder why the Lord used the symbol of goats to represent the unsaved? I believe that for anyone to rebel against God and reject Jesus even till the last day, that person must really be evil!
Such level of rebellion is not ordinary; it takes demonic and Satanic possession for anyone to become that evil and rebellious towards God. We can class unrepented Satanists, witches and warlocks under this category of “goats” which the Lord mentioned in this parable. At times, very evil people can as well appear as goats in dreams.
It is true that you won't find many places in scriptures where the Bible explicitly connotates goats with the symbol of evil. But if we delve a bit into history and paganism, we can find many clues to glean from and connect the dots.
First of all, in Yom Kippor, the scapegoat, azazel, personifies evil. Secondly, in Satanism and many other pagan religions around the world, the symbol of a goat is often used in worship. This is no coincidence. Many occult religious sites intentionally glorify the goat for this reason, because they understand what it represents spiritually.
It is not surprising that one of the statues in Satanic temple, known as the Baphomet, is the head of a goat.

From all that has been said so far, I believe that you've already gotten a sneak peek into the meaning of goats in dreams. From the explanation so far, we can now connect the dots as follows:
Goats in dreams often represent:
If you happen to see a goat in your dream, understand that you are under a very serious spiritual attack. In this case, it is either a high-ranking evil spirit has been assigned against the dreamer to monitor or attempt harming them.
There are people who have reportedly frequently seen a particular goat in their dreams and this goat always tries to get closer to them each time and sometimes it attempts to possess them. For some, a black goat always follows them around in their dreams. For some others, immediately they close their eyes to sleep they always see a goat coming into their room or watching them. If you're one of those seeing these kind of dreams, you need to take it seriously because the enemy is seriously out to destroy you! I recommend you pause everything and go on a fast praying ruggedly against this dream or go for deliverance.
Some people turned from being godly to being evil after they got possessed by a goat in their dream. Earnestly speaking, no one gets to this point by mistake. Before such happens, it's always that these people spent their life living in sin and being rebellious against God. When a person is so focused on feeding on evil, it opens the door for such deadly demonic possession.
The enemy came to kill, to steal and destroy (John 10:10). Goats don't appear in dreams to become a pet or play with anyone. If you're seeing goats in your dreams, you have no idea what Satan has plotted against you, it's high time you get right with God and submit to Him so that the devil will flee from you (James 4:7)!

If you ended up successfully killing a goat which has been annoying you in your dream, we can say that this is a sign of victory.

Prayer Against Goats In Dreams

Final Words On Meaning Of Goats In Dreams

Beloved, I believe you now understand the biblical meaning of a goat in a dream and you've been provided the solution against these sort of dreams.
If you're one of those seeing a goat in your dream, I advice you follow the guide in this article and pray untill these dreams completely cease from your dream life.
Also do not forget to share this article with someone else who might be interested in reading it.
God bless you!