Spiritual Meaning Of Getting Married In A Dream 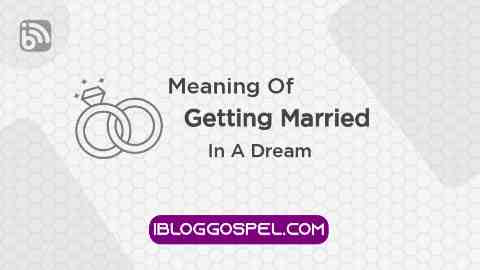 A dream about getting married is one of those dreams that often leave many worried, curious and asking many questions.
Although I've noticed that dreaming about getting married tends to happen more frequently to women than it does to men, this dream interpretation will touch on both genders.

Spiritual Meaning Of Getting Married In A Dream Christianity

Dream Meaning Of Getting Married

Biblical Meaning Of Getting Married In A Dream

Hebrews 13:4 KJV
Marriage is honourable in all, and the bed undefiled: but whoremongers and adulterers God will judge.

Marriage was made by God in Heaven and given to man, as a token representing the union between Christ and His Church. We're yet to grasp the spiritual meaning of marriage in its fullness — that is why the Bible calls it a mystery.
You'll notice that the devil had always hated mankind right from the onset; and the same level of hate is channeled towards Christ Himself and marriage. It is undoubtedly true that the enemy understands how powerful marriage is, that is why he goes extra miles to attack Christian marriages. Through much manipulation, the kingdom of darkness strives to prevent people from getting married to their God-assigned partner.
The attacks of the enemy against the institution of marriage comes in different ways, and one of the most serious ways that many often ignore is through dreams.
As I earlier mentioned, there are people who often see themselves getting married to a faceless person in their dream. That is just one way the enemy attempts to trap them in an evil marital covenant spiritually, so that they are unable to find and tie the knot with their destined partner.
There is less danger if you see yourself in a dream where you were preparing to get married. But the moment anyone puts a ring on your finger in your dream, know that you just entered an evil covenant with darkness; which might require serious deliverance prayers to break out of.
If you're one of those who often see yourself getting married in a dream, one way you can help yourself is to always reject a wedding ring in your dream and refuse to say, “I do”. It is also completely wrong to accept a dating or marriage proposal in your dream. Don't accept anyone's proposal in your dream. If they're real, let them meet you in the physical realm.
Many people have a hard time locating and connecting with their life partner in the physical world because they're already attached to an evil spirit through the kind of dreams.
Listen, any dream from God concerning marriage will most likely involve someone you already know and love in your waking life. Another important point to note is that, if the dream is from God, it will always end before wedding rings are introduced and exchanged. If God wants two people to get married, He'll rather prefer it happens in the physical than in the spiritual realm. Anything contrary to this is a deception and manipulation from the kingdom of darkness.
You see, getting married in a dream is not something to be taken lightly.

Dream About Getting Married To A Stranger

Some people often see themselves getting married to a stranger in their dream. This is just one of the manipulations of darkness. This dream is similar to getting married in a dream to someone you can't see his/her face. The devil is really at work to destroy the marital destiny of many in these last days. Don't be ignorant of his devices!
If God gives a dream concerning marriage to anyone, that dream will never have to do with getting married to a strange person. Any marriage dream that brings doubt, fear and confusion is not of God but from the enemy.

Some people often assume that wedding dreams mean death. That is far from the truth. But I'd rather prefer to actually get married than to see any wedding dream. Seeing wedding dreams is not a qualification or requirement for anyone to get married. These dreams are often full of manipulations. Seeing none is safer.

Dream Of Getting Married Again To Husband

Isaiah 54:17 KJV
No weapon that is formed against thee shall prosper; and every tongue that shall rise against thee in judgment thou shalt condemn. This is the heritage of the servants of the Lord, and their righteousness is of me, saith the Lord.

Whenever you see such dreams, do not think it is your spouse you were getting married to. Understand that your marriage is under attack. You have to rise up and fight back!

Dream Of Daughter Getting Married

Prayer Against Evil Marriages In Dreams

Final Words On Getting Married In A Dream

We must all understand that marriage is a good thing, but that's not often the case in dreams. It's preferable if it happens here on earth than in your dreams. If you always see yourself getting married in a dream, I'll advise you pray for such dreams to cease completely.
If God really wants anyone to get married, He'll make it happen in the physical realm, not in their dreams. The contrary is often a demonic attack from the kingdom of darkness.
I hope this dream interpretation concerning marriage spoke to you.
God bless you.