Meaning Of Dancing In The Dream

Seeing yourself dancing in a dream might look very strange to you. Here is the meaning of dancing in the dream.
Follow 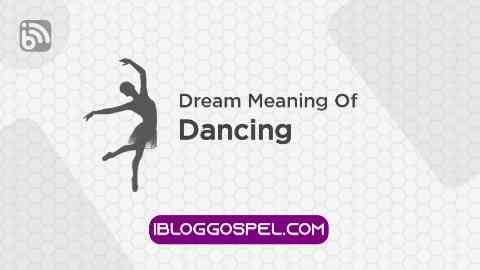 It is not strange or uncommon to see oneself or someone else dancing in the dream. Dreams about dancing come frequently — to both Christians and non-Christians alike.
Psalm 30:11 KJV
Thou hast turned for me my mourning into dancing: thou hast put off my sackcloth, and girded me with gladness.
I understand that dreams about dancing may always be exciting, but it is also important to stress that there are two sides to these dreams. They can either be a good or bad omen.

Although dancing is generally seen as an expression of joy, I'll like you to understand that not every form of dancing dream is godly; not every act of dancing in the dream should be allowed to continue. There are dancing dreams that are worth thanking God for, and there are also dreams about dancing that should be prayed against. I'll explain more as we proceed.
Ever seen yourself dancing in a dream and wondered what it meant? You are not alone. There are many other people who see different kinds of dancing dreams as follows:
Every dream about dancing always has a very important message to communicate to the dreamer. Pay attention to your dancing dreams; the most important thing that must be deciphered about these dreams is whether they are godly or not. From there we can then ascertain the interpretation and what to do with them.

Spiritual Meaning of Dancing In The Dream

When you see a dream about dancing a godly dance and dancing to the right music, it is often an indication that something new from God is about to come your way. Such a dream is often communicates that God is doing or about to do something new and marvellous on the life of the dreamer.
Godly dreams about dancing always confirm and signify that...

Jeremiah 31:13 KJV
Then shall the virgin rejoice in the dance, both young men and old together: for I will turn their mourning into joy, and will comfort them, and make them rejoice from their sorrow.

Dancing in dreams also happens to be a way the human spirit rejoices and shows appreciation for what God is doing or about to do, even before it manifests. We may not yet see its physical manifestion, but the spirit knows it is coming and just cannot wait to start appreciating God for it.
But as I earlier said, it is not every form of dancing that one should take pleasure in. There is the possibility of dancing at the wrong time and dancing for the wrong cause.
God takes pleasure in people who dance for Him but there is also a form of dancing that could be offensive to Him. We're familiar with the story of the golden calf; where it happened that after Moses went up the mount to get the tablets of the ten commandments from God, the Israelites set up an idol and began dancing around it.

Exodus 32:19 KJV
And it came to pass, as soon as he came nigh unto the camp, that he saw the calf, and the dancing: and Moses' anger waxed hot, and he cast the tables out of his hands, and brake them beneath the mount.

We know that God’s reaction to that sort of dancing was anger. He wasn't pleased with it.
There are dreams of dancing that could indicate that one needs to turn away from their unrighteous ways and turn to God. There are people who see themselves dancing to ungodly music in a dream or dancing in worldly parties, drinking and dancing. That is neither a type of dancing dream to rejoice in or allow to continue.
Such dreams often indicate that there is too much worldliness in the life of the dreamer. The dream comes to show them how far they've backslided and gone away from God. If you often see this kind of dreams, the best thing to do is to get right with God before it's too late.
See Also: How To Get Right With God After Backsliding
The spiritual meaning of every dancing dream should either make us glad or get us in the place of repentance — depending on what sort of dancing it was (and to whom) we did it in the dream.

Biblical Meaning of Dancing In A Dream

If you go through scriptures, you'll notice that dancing was always attributed to the Lord's deliverance and goodness to His people. When there was no dancing, there was mourning and sadness (Lamentations 5:15).
David was an ardent worshipper and dancer. But the Bible never told us that David danced to any sort of music or for any ungodly purpose. We are told that all His dancing was done for God.

2 Samuel 6:14 KJV
And David danced before the Lord with all his might; and David was girded with a linen ephod.

The biblical meaning of dancing in a dream often speaks of gratefulness, rejoicing in the spirit and victory. One of the secrets to the uncommon victory that David always had over his enemies was his dancing to the Lord

Psalm 149:3-4 NIV
Let them praise his name with dancing and make music to him with timbrel and harp. For the LORD takes delight in his people; he crowns the humble with victory.

Watching Someone Dance In A Dream

If you watched someone dance to a godly tune in a dream, it is evident that the Lord is about to change their story and turn things around for them.
But if you watched someone dance to an ungodly tune in a dream, it simply tells that they have gone astray — off the path of God. Probably this dream is shown to you so you can warn them to get right with God (not to criticise them).

Dream About Dancing In Church

Seeing a dream about dancing in church in most cases is a good omen. But it is also needful to observe whether it is a true church or a church you would want to find yourself in (or one you wouldn't). Then you should know what to do with this dream.

Dream About Dancing In A Group

A dream about dancing in a group can either be from God or from the enemy, depending on what sort of group it is.

Psalm 1:1 KJV
Blessed is the man that walketh not in the counsel of the ungodly, nor standeth in the way of sinners, nor sitteth in the seat of the scornful.

If you see yourself dancing among strange people in a strange gathering with ungodly people, then something is definitely not right about this dream. Pray that it doesn't repeat itself again.

There you have it, beloved. This dream interpretation about dancing might not be exhaustive. But I believe that from all that have been said here, you should be able to get a good understanding concerning the meaning of your dancing dreams.
If you need a personal interpretation concerning a dream about dancing that you had, always feel free to message me.
God bless you.