Christian Dream Interpretation, Why Do We Need It?

Christian Dream interpretation is a powerful gift to the Body of Christ. Let's talk about why we need this gift.
Follow 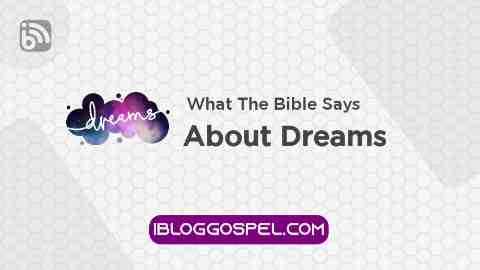 I have discovered that many people aren't only uncertain on whether or not the dreams they see actually mean anything spiritually. But there are also another set of people who are skeptical on the importance of dreams and the impact dreams can have on their waking life.
I can say that two major categories of dreamers exist:
Simply put, the first group assumes that dreams do not mean anything and can't have any impact on their waking life. While the second group treats every dream they see as very important, because they believe dreams can impact their waking life in one way or the other.
In order to connect the dots and bring clarity to the confusion posed by the opinions of these two sets of dreamers, we've decided to answer some question in this article. These questions include;
I trust that by the time you've read this article to the end, you must have gotten a clear understanding on how important dreams are, their spiritual significance and the impact they can have on a person's waking life. Follow up as we explore this interesting topic.

What Do Dreams Mean Spiritually?

Do dreams mean anything spiritually? Yes, dreams do mean a lot spiritually. Life itself is spiritual. Man is as well a spiritual being. Because man is a spirit being, he has the ability to access spiritual things (including dreams).
Dreams are often spiritual communicatons delivered to the soul of man (which is actually the real man) while he sleeps. This is just one reason why it is unwise for anyone to say their dreams don't mean anything and can't affect their walking life. Dreams were never meant to be handled that way.
When you go through scriptures, you'll find out that God created dream as a primary means for communicating with man. To further confirm this, you'll also notice that in the Bible, God even spoke to unbelievers through dreams.
For instance, when Abraham went into the land of Gerar, his idea was to say that Sarah wasn't his wife so that the inhabitants of the land would allow him stay. But God came to the king of Gerar that same night and opened the secret to him, that Sarah was truly Abraham's wife.

Genesis 20:1-3 KJV
And Abraham journeyed from thence toward the south country, and dwelled between Kadesh and Shur, and sojourned in Gerar. [2] And Abraham said of Sarah his wife, She is my sister: and Abimelech king of Gerar sent, and took Sarah. [3] But God came to Abimelech in a dream by night, and said to him, Behold, thou art but a dead man, for the woman which thou hast taken; for she is a man's wife.

When king Nebuchadnezzar had a strange dream, notice that the first thing he did when he woke up was to seek an interpretation for the dream he saw.

Daniel 2:1-2 KJV
And in the second year of the reign of Nebuchadnezzar Nebuchadnezzar dreamed dreams, wherewith his spirit was troubled, and his sleep brake from him. [2] Then the king commanded to call the magicians, and the astrologers, and the sorcerers, and the Chaldeans, for to shew the king his dreams. So they came and stood before the King.

If dreams were irrelevant and had no spiritual implications, I don't see why a king would go to the extent of finding the accurate interpretation for his dream—through every possible means. It was because king Nebuchadnezzar knew that dreams are revelations and the dream he saw could possibly be a revelation concerning him and his kingdom, that is why he went all out to seek the meaning for it.

Daniel 2:24,26-28 KJV
Therefore Daniel went in unto Arioch, whom the king had ordained to destroy the wise men of Babylon: he went and said thus unto him; Destroy not the wise men of Babylon: bring me in before the king, and I will shew unto the king the interpretation. [26] The king answered and said to Daniel, whose name was Belteshazzar, Art thou able to make known unto me the dream which I have seen, and the interpretation thereof? [27] Daniel answered in the presence of the king, and said, The secret which the king hath demanded cannot the wise men, the astrologers, the magicians, the soothsayers, shew unto the king; [28] But there is a God in heaven that revealeth secrets, and maketh known to the king Nebuchadnezzar what shall be in the latter days. Thy dream, and the visions of thy head upon thy bed, are these.

When Daniel interpreted Nebuchadnezzar's dream, in his words you could literally see that he told the king that the dream he saw was a secret revealed to him by God—concerning his kingdom. It might also interest you to know that King Nebuchadnezzar neither knew nor worshipped God, but God still passed through a dream to reveal such a powerful thing to him. This tells us that dreams can be very important revelations concerning our lives; and due to this fact, this we shouldn't take them lightly.

Job 33:14-17 KJV
For God speaketh once, yea twice, yet man perceiveth it not. [15] In a dream, in a vision of the night, when deep sleep falleth upon men, in slumberings upon the bed; [16] Then he openeth the ears of men, and sealeth their instruction, [17] That he may withdraw man from his purpose, and hide pride from man.

The book of Job makes it clear to us that God speaks and reveals secrets to man through dreams, and as you have seen so far, He doesn't only do that to people who know and follow Him. God can speak to anyone through dreams and He has been doing so.

1 Kings 3:5 KJV
In Gibeon the Lord appeared to Solomon in a dream by night: and God said, Ask what I shall give thee.

God can as well speak to you and show you things concerning your life and destiny through dreams. I advise you pay more attention to your dreams.

What The Bible Says About Dreams

Joel 2:28 KJV
And it shall come to pass afterward, that I will pour out my spirit upon all flesh; and your sons and your daughters shall prophesy, your old men shall dream dreams, your young men shall see visions.

The Bible makes us understand that in the last days, one of the major means through which God will speak to His people is dreams. Joel 2:28 literally tells us that the end time revival is meant to revive and activate in many, the gift of dreaming prophetic dreams.
Dreams come from three major sources: either from God, the human mind or the enemy. A Christian who is filled with the Holy Spirit will occasionally see prophetic dreams from God. That is one of the abilities that the end time outpouring of the Holy Spirit is purposed to give a Believer.

1. Test The Spirit Behind Dreams

The Bible instructs us to not devour and absorb just anything simply because it is a spiritual thing. There is also the possibility of being deceived by spiritual things. Dreams from the enemy can sometimes be very deceptive and misleading; that is why we must walk with discernment and tread with caution.

1 John 4:1 KJV
Beloved, believe not every spirit, but try the spirits whether they are of God: because many false prophets are gone out into the world.

It is needful to stress that because not all dreams come from the Spirit of God, a Christian needs to be able to discern the source of every dream they see; they must acquire knowledge and wisdom on how to go about handling their dreams.

Genesis 40:8 KJV
And they said unto him, We have dreamed a dream, and there is no interpreter of it. And Joseph said unto them, Do not interpretations belong to God? tell me them, I pray you.

Daniel 1:17 KJV
As for these four children, God gave them knowledge and skill in all learning and wisdom: and Daniel had understanding in all visions and dreams.

Not everyone has the ability to interpret dreams, but I'm sure it is always a blessing to meet someone who can give accurate biblical interpretation for our dreams.

3. God Speaks To Prophets Through Dreams

Some people have the habit of looking down on dreams as meaningless and irrelevant. If God said that He speaks to His prophets also through dreams, I think that's serious enough for people to stop taking for granted the dreams they see.

Numbers 12:6 KJV
And he said, Hear now my words: If there be a prophet among you, I the Lord will make myself known unto him in a vision, and will speak unto him in a dream.

Not everyone can see visions while awake. That is why dreams come in handy as a primary means through which God communicates with man.

Genesis 31:24 KJV
And God came to Laban the Syrian in a dream by night, and said unto him, Take heed that thou speak not to Jacob either good or bad.

We have seen in many places in scriptures that God gives instructions and guidance through dreams. This also tells us that dreams could serve as a compass for our lives. We can ask for more prophetic dreams from God and He will give them to us.

Jeremiah 33:3 KJV
Call unto me, and I will answer thee, and shew thee great and mighty things, which thou knowest not.

Final Words On What The Bible Says About Dreams

Beloved, I believe that you have seen for yourself that dreams are not meaningless, irrelevant or unimportant. People seek accurate dream interpretations out of the understanding that the dreams they see have the ability to affect their life in one way or the other. God gives directions and instructions to man through dreams—we should ask Him for more of such dreams.
There are certain people who dream a lot, but that shouldn't be seen as something strange. My advice for them is that, although dreams are very important, they shouldn't allow this ability to distract and steal their focus from God.
Remain blessed.