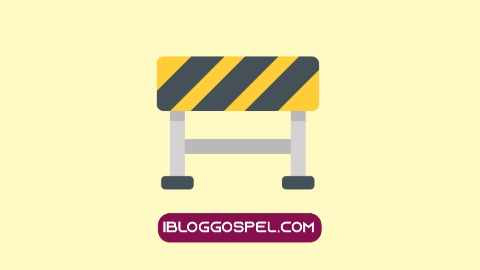 So far, much has been said on this blog concerning prayer. But since prayer is an integral part and a very vital aspect of Christian living, we will exploring even more on it as the Spirit gives the insights. The overall goal is to improve your prayer life and make your prayers more effective.
We've been told that prayer is powerful. But can there be a hindrance to prayer? I will say, yes! These hindrances necessarily do not have to stem from the kingdom of darkness (as many always assume). Sometimes, a Christian can become the source of their own hindrances to prayer.
We're familiar with the story of Daniel and how the answers for his prayers were obstructed from getting to him—by the prince of Persia (a fallen angel) in the air.

Daniel 10:12-13 KJV
Then said he unto me, Fear not, Daniel: for from the first day that thou didst set thine heart to understand, and to chasten thyself before thy God, thy words were heard, and I am come for thy words. [13] But the prince of the kingdom of Persia withstood me one and twenty days: but, lo, Michael, one of the chief princes, came to help me; and I remained there with the kings of Persia.

This story has its own lessons to teach us, but that's not what we're going to talk about today. Since the prayer of the righteous avails much, I believe that no force of Hell can stop the prayer of such a person. And even if it happened that a dark entity tried to hinder a person's answers to their prayers, the responsibility is on God to deal with it (not the individual).
We were not told that Daniel's prayers were not heard. The Angel of God said clearly that his prayers were heard right from the first day of his fasting (Daniel 10:12). The hindrances of prayer we are about to discuss today concerns things a Christian could [ignorantly or intentionally] do that could prevent their prayer from ascending, and being heard or being answered by God.

When A Christian Prays Amiss

In the scriptures, the Apostle James taught on the hindrances of prayer summed up these words: "ye ask amiss". I believe that this is also the Lord's mind concerning the wrong way many Christians pray.

James 4:3 KJV
Ye ask, and receive not, because ye ask amiss, that ye may consume it upon your lusts.

What does the Bible says about praying amiss?

In the book of Matthew 7:7, our Lord Jesus said that we should ask because it will be given unto us. But what happens when we ask and keep on asking without receiving? It's much likely we are asking amiss.
We must understand that God is very principled. The fact that He says we should ask and we'll receive doesn't automatically mean we can ask just anything and receive. There are principles to receiving from God (as seen in His Word) which we must follow. We can find an instance of such principle in Matthew 6:33.

Matthew 6:33 KJV
But seek ye first the kingdom of God, and his righteousness; and all these things shall be added unto you.

Simply put, Matthew 6:33 makes us understand that there are things we can ask from God and will not receive because we haven't put Him and His kingdom first; we aren't 'kingdom minded'. This is just one way a Christian can ask amiss and hinder their own prayer.
It might also interest you to know that quality prayer isn't always about praying and sweating for hours. Quantity doesn't always determine quality. It is possible for a Christian to spend two hours asking God for the wrong thing or asking for the right thing at the wrong time. This also translates as asking or praying amiss.
To further understand how a Christian can pray amiss, let's delve into more on this under the subheadings below:

Not Asking According To The Will Of God

It's true that God's will is vast. No one understands the supreme will of the Almighty in its entirety, but we all can know the specific will of God for our lives!

Ephesians 5:17 KJV
Wherefore be ye not unwise, but understanding what the will of the Lord is.

“Ye ask, and receive not, because ye ask amiss, that ye may consume it upon your lusts.” - James 4:3.

This is where many miss it. God isn't going to provide our wants just so we can spend them feeding our lusts. Lusts include greed; excessive love for materiality; the unending hunger to garner riches and compete with other people, etc.
In most cases, God intentionally refuses to answer certain prayers for material possessions because the one asking doesn't have it in mind to use what will be given them to advance the kingdom of God on earth.
God is not poor, but God isn't Santa Claus; He doesn't exist just to dish out gifts for nothing. Many Christians do not know that they could receive as much as they want from God if they had plans to use what will be given them to propagate the Gospel and advance God's kingdom on earth.
Fortunately, we can't trick or scam God. He knows our hearts and He knows the hearts of those with great and mighty plans for His kingdom. If you want more you must be faithful in little (Luke 16:10).

Other Hindrances Of Prayer

Let's take a look at more hindrances of prayer below.

Funny enough, most grace preachers hold this strange belief that they do not need to ask God for forgiveness of sins anymore—after their salvation. We all know that living on earth is difficult; living right in our present world is a daily struggle. Each day, the righteous falls short even without knowing.
Besides, what about a scenario where a Christian willfully sins and knows fully well that they sinned against God that day? And what do you call it when they go straight to make requests to God without confessing their sin and asking for His forgiveness? I call it PRIDE! Yes, you can say that again. It is pride.

Psalm 66:18 KJV
If I regard iniquity in my heart, the Lord will not hear me.

The Psalmist understood this secret to getting his prayers through to God. He understood that if he had unconfessed sin, God might decide not to listen or answer his prayers! And for this reason, he would have to confess his sins before approaching God with his requests, with a clear conscience!

A person who doesn't have faith but prays to receive a thing from God is literally playing and not praying.

Hebrews 11:6 KJV
But without faith it is impossible to please him : for he that cometh to God must believe that he is, and that he is a rewarder of them that diligently seek him.

Much has been said concerning faith on this blog and its role in ensuring our prayers are effective. In a subsequent article, we'll talk about how to grow your faith. So keep an eye on the blog; keep visiting.

This is the part that many do not want to hear. This is for the married but the unmarried can also learn a thing or two from it.

1 Peter 3:7 KJV
Likewise, ye husbands, dwell with them according to knowledge, giving honour unto the wife, as unto the weaker vessel, and as being heirs together of the grace of life; that your prayers be not hindered.

I love how the writer of the book of 1 Peter ended this verse hitting the nail straight on the head, "that your prayer be not hindered!" There's literally no room to twist this scripture to mean something else.
Marriage is a mystery and God sees the legally married bride as He sees the Church. The bride is a reflection of God's Church on earth; she's not meant to be dishonoured, mistreated or enslaved simply because the man is the head.
In the sight of God, both the male and female are heirs of grace; saved by the same grace. Jesus died for both gender. The female gender is not inferior to the male. If a Christian man treats their wife below the standard set by God in His Word, such an act can [unarguably] become a serious hindrance to that man's prayers.

How To Overcome Hindrances To Prayer

I believe that the hindrances of prayer can be overcome by simply going ahead to fix the errors that have been clearly pointed out in this article. The problems have been spotted and the solutions are glaring enough for anyone to see. I'm certain that if we harnessed grace to corrected these things, we would have a better prayer life and prayer would work more for us.

Final Words On Hindrances Of Prayer

There are other mild hindrances of prayer which I assume every Christian should already know. They include distractions, fears, guilt, time management, etc. I'm sure these obstacles are easier to get rid of, compared to the ones we've discussed above.
I believe if every Christian understood how important prayer is, they would do everything within their power and by God's grace to deal with whatever may hinder their prayer.
If you were blessed reading this article, do not hesitate to share with as many as possible.
God bless you!