Home
Teachings
Who Is A Nazirite

What Is The Purpose Of A Nazarite, Who Is A Nazarite

In the story of Samson, the Bible makes mention of the word Nazarite. Let's see who is a Nazarite according to scriptures.
Follow 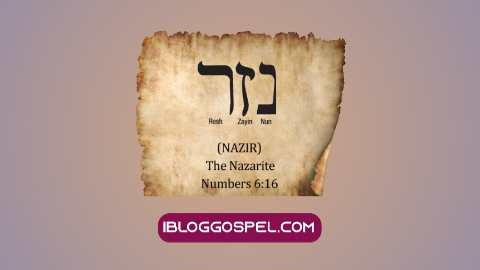 We're familiar with the story of Samson, although I must say, in most cases it's all about Samson and Delilah. But is that all there was concerning Samson? The answer is definitely no! So let's explore the story of Samson from a different perspective today.
Samson happened to be the 12th Judge of Israel. His life and times is mentioned in Judges 13-16. And I must say it's quite fascinating!
But right before Samson's birth, something happened. An Angel of the Lord appeared to his parents twice; he declared to them concerning the birth of Samson and gave them very specific instructions. The most important part of the information released by the Angel was that Samson was to be a Nazarite.

Judges 13:2-5 KJV
And there was a certain man of Zorah, of the family of the Danites, whose name was Manoah; and his wife was barren, and bare not. [3] And the angel of the Lord appeared unto the woman, and said unto her, Behold now, thou art barren, and bearest not: but thou shalt conceive, and bear a son. [4] Now therefore beware, I pray thee, and drink not wine nor strong drink, and eat not any unclean thing : [5] For, lo, thou shalt conceive, and bear a son; and no razor shall come on his head: for the child shall be a Nazarite unto God from the womb: and he shall begin to deliver Israel out of the hand of the Philistines.

What Is A Nazarite

The word Nazarite (Heb. form Nazirite) is gotten from the Hebrew word Nazir, which means "set apart" or "consecrated". The Nazarites were Israelites who were consecrated to the service of God under certain vows.
Although there was no clear mention of any Nazarite until the emergence of Samson, it is still evident that there existed such people even before the time of Moses.
The Nazarite was expected to live an extremely consecrated life. The Nazarite vows put the Nazir in a place where he was totally separated from the world and the ways of the world. The Nazarites were expected to be holy, pure and highly-principled.

A Nazarite Unto God

Judges 13:5 KJV
For, lo, thou shalt conceive, and bear a son; and no razor shall come on his head: for the child shall be a Nazarite unto God from the womb: and he shall begin to deliver Israel out of the hand of the Philistines.

The information given by the Angel of the Lord to the parents of Samson clearly stated that, Samson was created and appointed by God to be a Nazarite—specifically for the purpose of becoming a ruler of Israel and delivering the Israelites from the hands of the Philistines (Judges 13:5).

What Is A Nazarite Vow

The Nazarite vow involved three things. The Nazir were prohibited from:
If anyone was called to be a Nazarite, he was to ensure that he abided by these rules throughout his lifetime or the specified period as a Nazir. The Nazir-to-be was to undergo certain rites and take these vows before their induction as a Nazarite was complete. Living contrary to the vow could attract dire consequences.

What Is The Purpose of A Nazarite

The Nazirite calling was a calling to a special service to God. Just like it was with the Nazarites, from anyone whom God calls and sends for a special purpose on earth today, He expects a high level of consecrated life.

Acts 18:18 KJV
And Paul after this tarried there yet a good while, and then took his leave of the brethren, and sailed thence into Syria, and with him Priscilla and Aquila; having shorn his head in Cenchrea: for he had a vow.
Acts 21:23-26 KJV
Do therefore this that we say to thee: We have four men which have a vow on them; [24] Them take, and purify thyself with them, and be at charges with them, that they may shave their heads: and all may know that those things, whereof they were informed concerning thee, are nothing; but that thou thyself also walkest orderly, and keepest the law. [25] As touching the Gentiles which believe, we have written and concluded that they observe no such thing, save only that they keep themselves from things offered to idols, and from blood, and from strangled, and from fornication. [26] Then Paul took the men, and the next day purifying himself with them entered into the temple, to signify the accomplishment of the days of purification, until that an offering should be offered for every one of them.

There were those who decide to become a Nazarite for a short period of time (Apostle Paul was one of such people). This required that one would take the oath to become a Nazarite for a set period of time (let's say a month). And after the expiration of that time, he was expected to cut his hair and burn it on the altar and then offer a sin offering and a peace offering (Numbers 6:18).
Those who were to be a Nazarite for life made the decision at a certain stage in their life. They would keep the Nazarite vow and won't cut their hair for the rest of their life.
While very few like Samson were destined to be a Nazarite from birth. They would not cut their hair right from birth throughout all the days of their life.

The Expected Character of Nazarites

Lamentations 4:7 KJV
Her Nazarites were purer than snow, they were whiter than milk, they were more ruddy in body than rubies, their polishing was of sapphire.
Amos 2:11-12 KJV
And I raised up of your sons for prophets, and of your young men for Nazarites. Is it not even thus, O ye children of Israel? saith the Lord. [12] But ye gave the Nazarites wine to drink; and commanded the prophets, saying, Prophesy not.

Notice that right before the birth of John the Baptist, the Angel of the Lord also appeared to his parents (Zechariah and Elizabeth) and gave them a similar instruction that was given to Samson's parents. The information also contained a Nazarite vow:

Luke 1:11-13,13-16 KJV
And there appeared unto him an angel of the Lord standing on the right side of the altar of incense. [12] And when Zacharias saw him, he was troubled, and fear fell upon him. [13] But the angel said unto him, Fear not, Zacharias: for thy prayer is heard; and thy wife Elisabeth shall bear thee a son, and thou shalt call his name John. [14] And thou shalt have joy and gladness; and many shall rejoice at his birth. [15] For he shall be great in the sight of the Lord, and shall drink neither wine nor strong drink; and he shall be filled with the Holy Ghost, even from his mother's womb. [16] And many of the children of Israel shall he turn to the Lord their God.

What Was The Source Of Samson's Strength?

So after all that has been said, what exactly do you think was the source of Samson's strength?
I honestly think Samson's hair [in connection with his strength] is exaggerated. This is not rocket science. If anyone lived a high level of consecrated life like it was expected of the Nazarites, they would gain access to a certain dimension of God that is not available for everyone.
Samson's hair was just one of the requirements of the Nazarite vow. If one kept the vow then he would access the benefits attached. Obedience always comes with benefits and disobedience has its consequences.

Did Samson Break His Nazarite Vow?

Okay, here is another one: Did Samson truly break his Nazarite vow and is that what likely caused his untimely death? Seems like it.
First of all, recall that one of the rules in the Nazarite vow was that Nazarites were not expected to go near or touch dead bodies. Let's see what Samson did.
So did Sampson break his Nazarite vow? I'll leave that for you to judge.

These two are often confused with each other. It is needful we make a clear distinction between the two of them.
A Nazarite is a title given to an Israelite who took vows to live an extremely consecrated life, as a requirement for a special service to God.
A Nazarene is the title of a person who was from the city of Galilee in Nazareth (a geographical location). For instance, "Jesus of Nazareth or Jesus the Nazarene".

The Nazarite vow today is not complicated as it was in Biblical times. Everyone who wants to be mightily used of God must live a completely consecrated life unto God. There are no alternatives to this.
Consecration was the major requirement of the Nazarite vow and the new testament is filled with verses instructing all genuine Christians to live a consecrated life unto God.

1 John 2:15 KJV
Love not the world, neither the things that are in the world. If any man love the world, the love of the Father is not in him.

Romans 12:1 KJV
I beseech you therefore, brethren, by the mercies of God, that ye present your bodies a living sacrifice, holy, acceptable unto God, which is your reasonable service.

2 Corinthians 6:17 KJV
Wherefore come out from among them, and be ye separate, saith the Lord, and touch not the unclean thing ; and I will receive you.

Brethren, I hope you learned something new from today's teaching. The keypoint here is that, unlike it was in the old testament, consecration is required of everyone who says they belong to God. A very high level of consecration is required of everyone who wants to be mightily used of God. The Nazarite vow today is not complicated, every genuine Christian should willingly take it.
Recommended: The Purpose of Consecration
If you were blessed reading this article, remember to share with as many as possible.
God bless you!