What The Bible Say About Lies

What does the Bible say about lying? Let us learn what the Bible says about lies from the holy Scriptures.
Follow 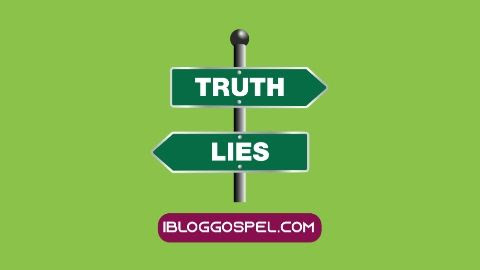 If you've been observant, you'll notice that whenever an individual is caught in the act of lying and repremanded, the first defense they often throw off is "no one is perfect". But do you think this is a valid yardstick for measuring who should tell lies and who shouldn't? I don't think so.
It might interest you to know that when the Bible spoke against telling lies, it didn't mention that people have to be perfect before they can be honest.
Imagine a scenario where everyone on earth lived by the notion that 'no one is perfect, hence no one can be honest'; I'm sure the world would be a terrible place to live. No one would be willing to lend or entrust their life to another.
Having come across a good number of individuals—Christians who stay true to their words, I can boldly say that we still have genuine and honest people.
Again, the notion that no one is capable of meriting trustworthiness is a false notion. If we as individuals are dishonest, that doesn't automatically imply that everyone else in the world is that way. That's not the right mindset to possess.
Dishonesty has become a part and parcel of many people's lives (including several professing Christians). This is simply due to the fact that we live in a world where we are continually fed with the mentality that "all have sinned" and "there's no hope for anyone to be righteous"; and so everyone just has to "continue doing evil".
The truth that many will not want to admit is that, any Christian who leads their life based on this sort of mentalilty has willfully decided to not let God change them.

What Does The Bible Say About Lying

Romans 5:12 KJV
Wherefore, as by one man sin entered into the world, and death by sin; and so death passed upon all men, for that all have sinned.

It's undoubtedly true that everyone is born in sin; the Psalmist even admitted that in Psalm 51:5. The sin nature kicks in even at a very tender age. You'll be surprise to notice that a 3-year-old baby starts telling lies without learning it from anyone.
The sin gene from Adam is resident in and exerts its influence on everyone who is born into the world—until they submit their lives to Christ and gets saved.
The sacrifice of our Lord Jesus Christ on the Cross dismantled the power of sin; it supersedes the influence of sin and exerts God's power on whatever ability sin might have.
In the absence of Jesus Christ in a person, sin may be viable; but when Jesus steps in, sin is suppressed to the extent it loses its power and eventually loses its hold on that individual.
If a Christian claims that, it is because "all have sinned" and that's why they cannot stop telling lies, they [willfully] crucify the Lord afresh.

Hebrews 6:6 KJV
If they shall fall away, to renew them again unto repentance; seeing they crucify to themselves the Son of God afresh, and put him to an open shame.

It is true that no one becomes completely 'clean or perfect' at the moment they get saved. That is why the Holy Spirit takes up the work of transforming the saved immediately after their salvation. Yielding to the Holy Spirit is suppose to produce a "newness of life"—the new man, who no longer lives according to "corruption and deceit".

Ephesians 4:22-24 KJV
That ye put off concerning the former conversation the old man, which is corrupt according to the deceitful lusts; [23] And be renewed in the spirit of your mind; [24] And that ye put on the new man, which after God is created in righteousness and true holiness.

Ephesians 4:25 KJV
Wherefore putting away lying, speak every man truth with his neighbour: for we are members one of another.

The above scripture was part of Paul's letter to the Christians in Ephesus. Those people were Believers just like us; they had the same Holy Spirit like we have today. They were not perfect, yet it was required of them to put away lying. You won't find it anywhere in the Holy Bible where it is written that Christians must be perfect before they can become truthful and honest people.
The word 'Christian' is derived from the word 'Christ'. It simply means that those who are called by the title, "Christians" are like Christ. But wait... "Jesus is perfect and we're not". Right? Well, let's see an example of an imperfect man whom Jesus Christ Himself commended for being a truth-teller:

John 1:47 KJV
Jesus saw Nathanael coming to him, and saith of him, Behold an Israelite indeed, in whom is no guile!

Other words for guile include: cunning, treachery, fraud, tricks, deceit, deception, ploy.
Highlight the words "deceit" and "deception" in the above list. You can see that Jesus was literally saying that Nathanael was without deceit and didn't practice deception. Wow! So can a man attain such level of uprightness, even to the extent God Himself becomes amazed? You just saw that with Nathanael!
Let's see what other translations of that verse say:

John 1:47 NIV
When Jesus saw Nathanael approaching, he said of him, “Here truly is an Israelite in whom there is no deceit.”

John 1:47 ESV
Jesus saw Nathanael coming toward him and said of him, “Behold, an Israelite indeed, in whom there is no deceit!”

John 1:47 NKJV
Jesus saw Nathanael coming toward Him, and said of him, “Behold, an Israelite indeed, in whom is no deceit!”

John 1:47 NASB
Jesus saw Nathanael coming toward Him, and said of him, “Behold, an Israelite indeed, in whom is no deceit!”

So do we still have excuses?

What Does God Say About A Liar

Isn't it surprising that many Christians often see telling lies as "a small and irrelevant sin"? It's actually shocking to me. But this isn't about my opinion. Let's see how God rates the act of lying:

Proverbs 6:16-19 KJV
These six things doth the Lord hate: yea, seven are an abomination unto him: [17] A proud look, a lying tongue, and hands that shed innocent blood, [18] An heart that deviseth wicked imaginations, feet that be swift in running to mischief, [19] A false witness that speaketh lies, and he that soweth discord among brethren.

Notice that in the above scripture, telling lies was mentioned twice and emphasis was laid on the last verse (which is all about lies). Yes, you just saw that. That's how seriously God detests the act of lying.

What Does The Bible Say About A Liar

John 8:44 KJV
Ye are of your father the devil, and the lusts of your father ye will do. He was a murderer from the beginning, and abode not in the truth, because there is no truth in him. When he speaketh a lie, he speaketh of his own: for he is a liar, and the father of it.

Lying is evil (just like every other sin). Sin is evil and evil things belong to the kingdom of darkness. The Bible instructs us to have no fellowship with fruitless works of darkness (Ephesians 5:11).
Give to caesar what is caesar's. Since lies belong to the enemy, no Christian should have it in their possession. Any professing Christian who retains and uses this property of darkness is automatically proving that they are like Satan, their father.

What Does The Bible Say About Lying To Your Spouse

Colossians 3:9-10 KJV
Lie not one to another, seeing that ye have put off the old man with his deeds; [10] And have put on the new man, which is renewed in knowledge after the image of him that created him.

A couple who keeps secrets and lies to each other cannot stay together for long. No lasting marriage is built on the foundation of deceit.

The Benefits Of Giving Up Lying

Psalm 34:12-13 NIV
Whoever of you loves life and desires to see many good days, keep your tongue from evil and your lips from telling lies.

Lies have their way of getting people in trouble. In some cases, it can cost people their life. Honesty on the other hand, might be underrated by the world but it's unmatched; the Bible says it gives long life.

God Delights In The Truthful

Proverbs 12:22 KJV
Lying lips are abomination to the Lord: but they that deal truly are his delight.

Well, we saw this in the passage concerning Jesus and Nathanael. His reaction towards Nathanael said enough already.

Examples of Lying In The Bible

We can readily find an example of lying in the Bible from the story of Ananias and Sapphira—together with the consequences it brought upon them. Read Acts 5:1-11.

Consequences of lying in the Bible

Brethren, I believe much has been said already and the mind of God concerning telling lies has been unveiled to you. It is now your responsibility to act on it.
These days the world strives hard to make evil look normal—including the detestable act of lying. But always have it in mind that God commands us to come out of them (2 Corinthians 6:17).
Practicing honesty is not popular but it's rare. "Rare" is golden and noble. I believe every genuine Christian should pursue that.
If you were blessed reading this article, do not hesitate to share with others. God bless you!
Recommended: