What Does God-speed Mean

The Bible scarcely makes mention of godspeed. The word is one of the most underrated, but let's see what it means according to scriptures.
Follow 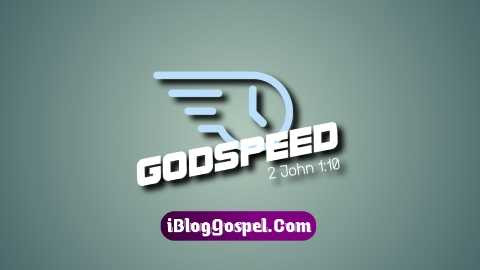 The noun “speed” is an old English word that wasn't originally used to refer to quickness or haste. It only took on its sense of quickness a few hundred years after it showed up in Old English meaning success, prosperity or good fortune.

What Does The Expression Godspeed Mean

Generally, the term “Godspeed” holds the intention of a personal blessing. It is a somewhat an old-fashioned way of saying "all the best, best wishes, wishing you success". It is often used sarcastically or in a humorous fashion, yet genuine, earnest or true concern can also be one's meaning when using this expression.

The intent is to convey hope or desire for another individual to successfully accomplish or complete a difficult task, mission, or journey either currently underway or about to be undertaken.

Godspeed Meaning In The Bible

The word “Godspeed” is only found once in the Bible (in the King James version). It was repeated twice under 2 John for the purpose of emphasis.

2 John 1:10-11 KJV
If there come any unto you, and bring not this doctrine, receive him not into your house, neither bid him God speed: [11] For he that biddeth him God speed is partaker of his evil deeds.

Whenever the word “speed” is mentioned, it's likely that the first thing that our jumps on is swiftness or haste.
We must understand that God does nothing in haste. He does things at their appointed time. God doesn't rush over anything He does. If He does something and it seems like He's doing it really fast, it is because He's doing that very thing at its appointed time. He will not want to delay till tomorrow, what He is supposed to do today. And there's nothing hasty about that.
So, to think that Godspeed has to do with God doing things in haste or enabling us to do things fast is a wrong interpretation.
The term “Godspeed” is scarcely used in the world today and when used, it is used to wish someone well. Just like telling someone, "All the best". But that's all the world knows about Godspeed. Today, we'll see what the Spirit has to say to us concerning this term from the holy scriptures.
The fact that this term appears in the King James version of the Bible shows that it's a very old English word. The original meaning of speed had nothing to do with quickness, being fast, haste or swiftness. It had to do with Success, Prosperity, Blessings and much more.
Like many other people, I've flipped through pages of the Bible, and several times, I've stumbled on the verse that contains the word Godspeed—without seeing it as such that should be paid much attention to. The Lord had to call my attention back to it.
You see... the Word of God is very vast. Sometimes, we tend to skip over words in the Bible that we think we've already seen so many times and we know the meaning (even when we really don't). But if the Lord should sit us down to expatiate on those words, we would be shocked at the level of depth a single word in scriptures could carry.

What The Lord Said Concerning Godspeed

He mentioned Godspeed as another term for Transcendence. To transcend involves the ability to do beyond our own expectation and beyond other people's expectation of us. Such ability comes from God and is coined as Godspeed. And of course, the agency responsible for this is the Holy Spirit within us.

Godspeed In The Bible

The components of Godspeed includes (but not limited to) the following:
Not everyone has Godspeed, and those who have it operate in all of the above, therefore giving them transcendence.

Why Doesn't Everyone Have Godspeed?

As I earlier stated, not everyone has Godspeed (and that includes some Christians).
Godspeed is God's hand upon a man. And God's hand isn't upon everyone.

Ezra 7:28 KJV
And hath extended mercy unto me before the king, and his counsellors, and before all the king's mighty princes. And I was strengthened as the hand of the Lord my God was upon me, and I gathered together out of Israel chief men to go up with me.

Ezra was enabled to do beyond what he was naturally able to do. That is transcendence. Because he had Godspeed, God's hand was upon him.
With the components of Godspeed including things like God's wisdom, Spirit of Excellence, God's Help, Supernatural retentive memory etc, we can boldly conclude that those are works from the hand of God upon a man.

Do Not To Wish Them Godspeed KJV

The early Church bidded people Godspeed, they didn't lay hands to impart it on people. Godspeed cannot be imparted. It was solely at God's discretion to determine who had it or not.

Just like wishing someone the best or wishing them success in all their life endeavours; you can only wish them, but can't give that to them.
So we can see Godspeed is such a powerful thing. When the early church wished other brethren Godspeed, it was just like saying, "May God's hand be upon you to give you supernatural success, breakthrough, progress, success and blessings".
And the Apostle John said, if somone doesn't come to you with the Gospel of Christ, don't bid them Godspeed. That word is just too heavy, too powerful and too precious to utter it just on anyone—especially those who do not deserve it.

2 John 1:10-11 KJV
If there come any unto you, and bring not this doctrine, receive him not into your house, neither bid him God speed: [11] For he that biddeth him God speed is partaker of his evil deeds.